'I diminished the importance of the Black women's vote in this election,' Longoria admitted, 'and what I said was wrong.'

Actress-activist Eva Longoria offered up an even more clear and detailed apology after her comments last week about Latina women being the “real heroines” of the 2020 presidential election.

“In my effort to celebrate Latina turnout, I diminished the importance of the Black women’s vote in this election. And what I said was wrong,” Longoria, co-founder of the Latino Victory Fund, told Joy Reid Tuesday on her MSNBC evening news program, The Reid Out. “It is a fact that African American women showed up in record numbers and brought us to victory. They saved this country.”

Longoria, a staunch supporter of President-elect Joe Biden, made the initial comments Sunday when she was interviewed on MSNBC and said that, “women of color showed up in big ways. Of course, you saw in Georgia what Black women have done, but Latina women were the real heroines here, beating men in turnout in every state and voting for Biden-Harris at an average rate of three to one.” 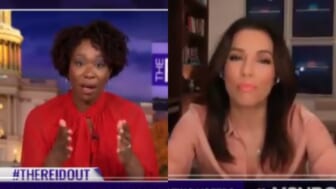 The comments were construed as the erasure of the dedication of Black women, including former Georgia gubernatorial candidate Stacey Abrams, who was credited with registering 800,000 voters in that state.

Read More: Why Kamala Harris’ Senate seat should go to a Black woman

Longoria’s first apology, written in a statement on Twitter, said that she was “not clear.” She wrote that she meant Latinas “turned out in greater numbers and voted more progressively than LATINO MEN.”

“Black women have long been the backbone of the Democratic Party, something we have seen played out in this election as well as previous ones,” Longoria wrote. “Finally, Black women don’t have to do it alone any longer.”

“Latinas (many who identify as Afro-Latina), indigenous women, AAPI women and other women of color are standing with them so we can grow our collective voice and power,” she continued. “Together, we are unstoppable! Nothing but love and support for Black women everywhere! You deserve a standing ovation!!!!”

Washington wrote: “I know Eva like a sister. We have been in many trenches together. She is a fighter for all women. Read below. This is what she meant. This is how she truly feels.”