A DoorDash driver has lost her job after a video of her confronting a customer went viral on Reddit. The driver accused the customer of lying about not receiving their delivery.

According to the Daily Dot, the incident took place at a CVS Pharmacy in Garner, North Carolina. The driver alleged that a manager of the pharmacy had reported to DoorDash that she had not received her food order, despite the driver stating that she delivered to her personally. The driver confronted the employee in the CVS and captured the encounter with her phone camera.

“Excuse me — I was just wondering why you said that your food never got delivered when I handed it to you,” the DoorDash driver said to the CVS worker as she was serving a customer. “That’s fraud, and now I might get charged for it.”

The CVS worker stated, “Why did you even have the nerve to come in my job, talking to me when I was with another customer?” The DoorDash driver responded, “Because you have the nerve to report your food as never been received, so I can get in trouble and have to pay for it, and lose my job. 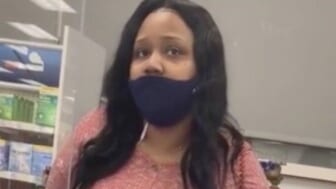 The CVS manager threatened to call the police on the driver, and the driver vacated the pharmacy.

Turns out, after the driver posted the video on Reddit, it went viral, and caused her to lose her job anyway. A DoorDash spokesperson released a statement regarding the video, as reported by TooFab: “We take the safety of our community extremely seriously, and such inappropriate behavior is never tolerated on the DoorDash platform.”

The spokesperson continued, “Any behavior that violates this zero tolerance policy is grounds for deactivation, and we sincerely regret that this incident fell short of the experience we strive to give our customers every day.”