EXCLUSIVE: Ossoff tells theGrio that attacks against him and Rev. Raphael Warnock is an attempt to 'distract us with racism and bigotry' 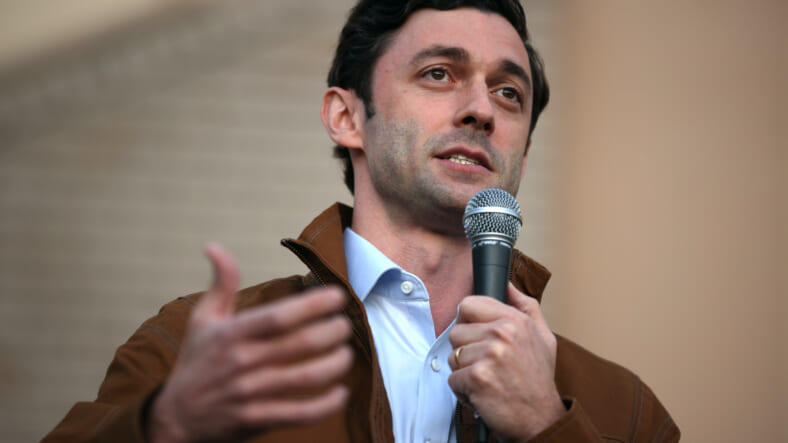 In a recent exclusive interview with theGrio, Ossoff dismissed incumbent Republican Sen. David Perdue, who has referred to Ossoff as a “radical” who supports a “socialist agenda,” as well as Sen. Kelly Loeffler, who had repeatedly called Senate candidate Rev. Warnock a “radical liberal” — a total of 13 times during their debate on Dec. 6.

“I dismiss them. This is just like garden variety paint by numbers, partisan nonsense,” Ossoff told theGrio.

Read More: Loeffler says there ‘isn’t a racist bone’ in her body at debate, refuses to say Trump lost election

Ossoff, a 33-year-old investigative journalist, more pointedly called out the racism in Perdue and Loeffler’s attacks against him and Warnock, who is the senior pastor at the historic Ebenezer Baptist Church, which was once led by Dr. Martin Luther King, Jr. “The attacks that they’re running against Reverend Warnock, yes, they’re racialized and racist and intended to other him,” he said.

Ossoff, who is Jewish, called out his opponent Perdue for enlarging his nose in a campaign ad earlier this summer that was later deleted. His campaign team called it an “unintentional error.”

“David Perdue, my opponent, a virulent anti-Semite, lengthened my nose in an attack ad to remind everybody that I’m a Jew and then refused to apologize for it even after the Jewish community here demanded an apology,” Ossoff told theGrio.

Read More: Sen. David Perdue claimed he was discriminated against as a white man

The young Democratic Senate hopeful said the attacks by Perdue and Loeffler — and the Republican Party at large — is a historically racist strategy used from a political playbook from years past.

“The GOP strategy in the South since [President Richard] Nixon has been something called the Southern Strategy, and it’s about dividing people along racial and cultural lines,” said Ossoff.

While his opponents are trafficking in old racist political tropes, Ossoff said he would much rather focus on the work he plans to do if elected to the U.S. Senate in January. That legislative agenda includes passing a new Civil Rights Act to end racial profiling and police brutality and “empowering doctors and scientists to fight COVID-19 and get economic relief to people who need it.”

“They don’t want that to be the focus because they know that these are popular policies. So they want to distract us with racism and bigotry,” Ossoff added.

Racial justice has been a consistent theme in Ossoff’s campaign. Just last week, the Democrat released a campaign ad called “The Talk,” which addresses the all too common conversation Black parents traditionally have with their sons about how to maneuver a society that too often views them as a threat.

“I really wanted to focus on this issue because it is so long past time that we passed a new Civil Rights Act,” Ossoff told theGrio.

“Those painful conversations in Black families that many white families aren’t even aware of — about how young people need to carry themselves and walk and talk and dress and how to be extra careful to avoid being assaulted or killed — that’s so wrong that we have to have those kinds of conversations in America.”

Ossoff said we should look no further than the shooting death of Ahmaud Arbery in February, which local law enforcement authorities were slow to make any arrests in until, of course, a national groundswell of outrage in the form of protests across the country pressured them to do so.

Ossoff is no stranger to the work of social justice and advocating for civil rights. His very first job in politics was as a young intern for the late Civil Rights icon, Congressman John Lewis. In a new campaign ad called Selma, which was released on Thursday, Ossoff recalls how Lewis helped shape his values and commitment to seeking justice for all Americans.

“Congressman Lewis gave me my first job. He instilled in me the conviction to fight for justice. He said to never give in, never give up, keep the faith and keep our eyes on the prize,” Ossoff says in the commercial.

“The promise of equal justice in America remains unfulfilled. So together we’ll fight for a new Civil Rights Act and a new Voting Rights Act to ensure equal justice for all no matter the color of our skin, to end racial profiling and police brutality, and to stop anyone from suppressing the sacred right to vote.”