U.S. District Judge Leslie Abrams Gardner, the sister of Stacey Abrams, ruled that denying so many voters access to the ballot so close to an election would likely violate the law. 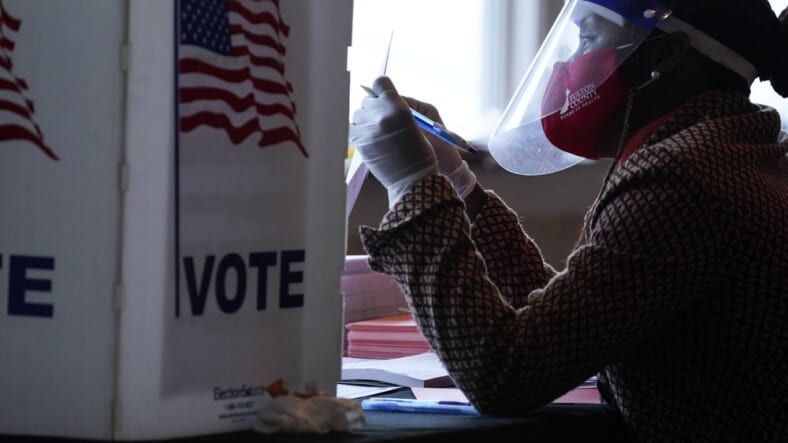 A poll worker talks to a voter before they vote on a paper ballot on Election Day in Atlanta on Tuesday, Nov. 3, 2020. (AP Photo/Brynn Anderson)

A federal judge ordered local election officials in Georgia to allow voting by more than 4,000 people whose eligibility was being challenged ahead of next week’s runoff elections for the U.S. Senate.

U.S. District Judge Leslie Abrams Gardner blocked election boards in Ben Hill County and Muscogee County, which includes Columbus, from forcing large numbers of voters to prove their residency before casting ballots in the runoffs. The judge ruled that denying so many voters access to the ballot so close to an election would likely violate the National Voter Registration Act.

Read More: Warnock and Ossoff each raise over $100M in Georgia Senate runoffs

Republican Sens. David Perdue and Kelly Loeffler both face runoff elections next Tuesday. If both lose to Democratic challengers Jon Ossoff and Raphael Warnock, Democrats will take control of the Senate.

Challenges against roughly 4,000 voters in Muscogee County and more than 150 voters in Ben Hill County were part of an effort by the Texas-based conservative group True The Vote to coordinate challenges statewide under a Georgia law that allows any registered voter to challenge the eligibility of any other voter within the same county.

The group said on Dec. 18 that it was bringing challenges in each of Georgia’s 159 counties against more than 364,000 voters whose residency was being questioned based on change of address data obtained from the U.S. Postal Service.

It’s up to local election boards to determine whether the challenges have merit. Several, including in Fulton and Cobb counties in metro Atlanta, have rejected them.

Because election officials in Muscogee and Ben Hill counties had determined the challenges had probable cause, anyone on the challenged list attempting to vote would have been required to prove their eligibility — as would anyone challenged who mailed an absentee ballot.

The judge’s order blocks the counties from impeding voting by anyone who was challenged, saying federal law prohibits “systemic” removal of voters from the rolls within 90 days of an election.

Attorneys for the county election boards had asked Gardner to recuse herself in the case. The judge is the sister of Stacey Abrams, Georgia’s Democratic nominee for governor in 2018 and founder of the voting rights group Fair Fight.