EXCLUSIVE: Lawmakers and experts say undoing the harm caused by COVID-19 and DeVos' inaction should be a top priority 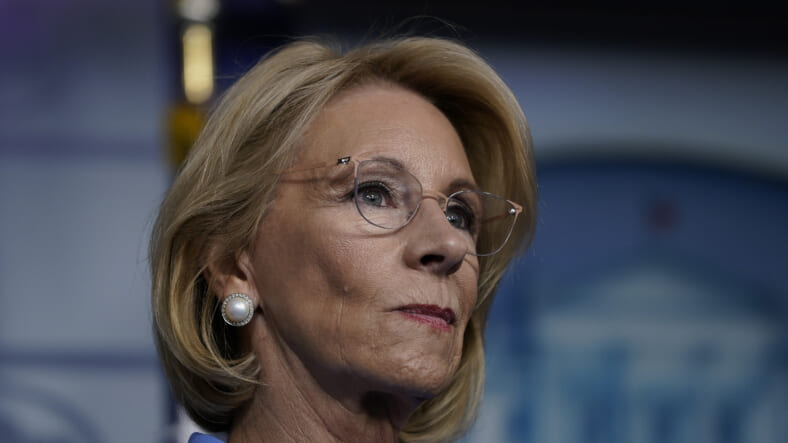 Secretary of Education Betsy DeVos listens as U.S. President Donald Trump speaks during a briefing on the coronavirus pandemic in the press briefing room of the White House on March 26, 2020 in Washington, DC. (Photo by Drew Angerer/Getty Images)

In a farewell letter to Congress earlier this week, DeVos, who is an avid supporter of school choice and the tax credit scholarship program, urged lawmakers to reject education policies by the incoming Biden administration. She also asked the congressional leaders to protect Trump administration policies that President-Elect Joe Biden has promised to give the ax.

DeVos, however, will not be missed by many. Her critics contend that she was marked absent for much of her time as the nation’s headteacher. She was most recently criticized for not being engaged with the public school system since the onset of the COVID-19 pandemic.

Critics of the current state of public education believe students are woefully behind due to a multi-system breakdown during the pandemic. The problems range from lack of computers or screens for virtual learning, student retention, and lack of support for families without Wi-Fi or internet. The concerns also center around special education students who have a tougher time with the disjointed efforts for classroom virtual learning.

Congressman Bobby Scott, who chairs the House Education and Labor Committee tells theGrio it’s imperative that we “educate the children.”

“A serious catchup strategy to make up for the loss of instruction” is a primary concern for the Virginia Democratic congressman.

Scott says he has many questions as to how the country moves ahead with a new administration. “What do we do to make up for the loss in education?” said Scott. “We have to focus on catching up, and it has to be a serious attempt. It is going to cost some money. Basically, it starts this summer. Are we going to have a two-month summer vacation?”

“Our committee will be at the forefront” of this education effort according to Congressman Scott, who has yet to talk to Biden’s education secretary nominee Miguel Cardona. Yet, Scott expects to work with the new secretary immediately following his confirmation.

In an exclusive interview with theGrio‘s April Ryan, President Barack Obama‘s Education Secretary, Arne Duncan, highlighted that the country hasn’t yet defeated COVID-19 and the impact it’s having on American youth.

“Our kids are paying a terrible price,” said Duncan, who called for a free national tutoring program and summer school.

The price tag is hefty, at the tune of billions upon billions of dollars. Duncan wants this request included in a stimulus package along with money for proper PPE’s for school officials, proper school ventilation and the hiring of more teachers to reduce class sizes.

Dr. Annette Anderson, deputy director at Johns Hopkins Center for Safe and Healthy Schools gives a reality check warning that “by and large, schools will look vastly different than they did last March.”

“Districts are forced to consider how to roll out a realistic timeline for vaccination plans as a condition of full reopening and projecting how long that might take. Until there is a nationally directed effort to disseminate best practices, districts are also having to consider global best practices around school reopening as a roadmap into this massive undertaking,” she said.

Anderson says there is a heavy lift.

“COVID has changed how districts recruit and retain teachers, how parents demand more personalized instruction for their children’s needs and how much schools will need to respond with systemic planning for both teachers and students’ social-emotional needs,” she added.

For the nation’s minority schoolchildren, Johns Hopkins experts say retention is an issue and that “districts will need to determine how to respond to the growing chorus, particularly among African American families, who want alternatives to returning to full in-person schooling.

“That’s a new challenge for districts to undertake but it will become an increasingly significant factor in maintaining district enrollments as the push to reopen continues into next fall,” Anderson said.