OPINION: History will count Abrams among the names of Americans who literally saved this republic from Trumpism 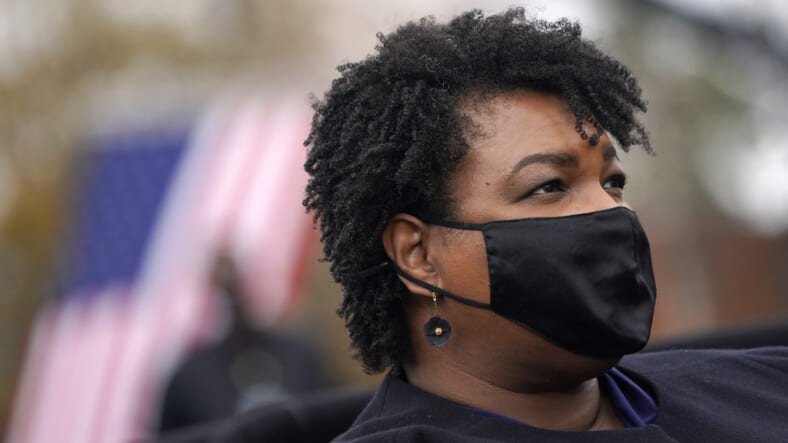 Despite last week’s unprecedented siege at the Capitol, it’s important that the events of Jan. 6 not overshadow the huge thank you owed to Stacey Abrams. The Pro-Trump insurrection shifted our attention away from historic and crucial runoff elections that cannot be understated.

I owe Stacey Abrams an apology. A big one. I totally did not get her, that is until this past election cycle when she pretty much single-handedly caused a political earthquake in Georgia, by helping flip the deep red state, Biden blue.

She repeated that feat again on Tuesday, Jan. 5, 2021 (my birthday) with the wins of Senator-elect Rev. Raphael Warnock and Senator-elect Jon Osoff.

I was tough on Ms. Abrams after she lost her race for governor of Georgia in 2018 because she didn’t play the game the way we play it here in Washington, D.C. She didn’t keep her head down and go quietly into the political “wait till the next run” room.

Ironically, she could have run for one of the U.S. Senate seats that were coming up in Georgia in 2020. I was baffled as to why she declined, and worse, why she so openly put her name in the mix as a candidate for vice president. It is no secret that my preferred candidate for that spot was the woman who ultimately got that spot, my Alpha Kappa Alpha Sorority, Inc. sister Vice President-elect Kamala Harris.

But Abrams really rubbed me the wrong way because she was breaking old norms, and not waiting her turn — but boy was I wrong.

I know better. I have spent my life being first, or the lone Black woman in rooms that we do not always get to be in. I know what it’s like to be told to shut my mouth. To be seen and not heard. To wait my turn. To just sit back and be grateful for the chance to be in the room. That’s the problem with racism and misogynoir structures that teach us as women and Black people to step back.

These structures and “norms” teach us to admonish each other and step on each other’s dreams and ambitions. They teach us to not go too far out on a limb because you only get rewarded in such a system if you play by their rules. Stacey Abrams has proved this isn’t true time and time again since her controversial ‘loss’ in 2018.

Abrams is a pioneer for the New South. She has created a political blueprint for us as Black women who live below the Mason-Dixon Line to organize in our states, to work the grassroots and to be bold enough to run for governorships and the United States Congress.

There are many things that we as Black Americans writ large and in Georgia should pay homage to Ms. Abrams for, but perhaps the greatest is her story. Her very American story. She hails from very humble roots; she went on to attend Spelman College and Yale Law School. She returned back home to Georgia to serve in the legislature and become the state’s first Black woman minority leader from 2011 to 2017.

Abrams was always making history, so it came as no surprise when she sought the Democratic nomination for governor of Georgia in 2018 that she had come to win. Unfortunately, she did not win, and there were accusations of voter fraud and voter suppression made against then-Secretary of State Brian Kemp, who was Abrams’ opponent and who ultimately won the governor’s race by a razor-thin margin.

Fast forward to the 2020 presidential election, Abrams was shrewd and she had a plan. This, of course, is a part of the lineage of Black women. We do what we must to protect our families, and uplift our people collectively.

Read More: What Black women’s political wish list should be for 2021

Look no further than Rosa Parks, who while generally known for being an activist who refused to give up her bus seat to a white person, we know that it wasn’t a spur-of-the-moment decision on that fateful day in 1955. The NAACP and Parks had been discussing a plan to desegregate public transportation for years. When asked if she made the choice on that day not to give up her seat because she was “tired” after years of such similar indignities, Parks responded, “No, the only tired I was, was tired of giving in.”

Like Sojourner, Harriett, Ida, Rosa, Fannie, Coretta, and Shirley before her, Stacey answered the call when her people and her nation needed her. She stepped up when others gave up. Post-2018, she spent the past two years building a firewall in Georgia, registering voters, doing the work, building bridges in the Atlanta suburbs and surrounding areas. She knew that if the state was ever going to go from red to purple, she had to get the ground game going, update the voter rolls and enfranchise all possible voters across the state.

In the final analysis, the Biden-Harris presidential win, and now the two Senate victories in Georgia are bigger than the candidates who won the election. Their victories started with the vision of a young Black woman from Georgia. Their victories rest on her shoulders, and the tens of thousands of Georgians who worked with her (and across the nation) to put in place an infrastructure that would lay the groundwork for their respective victories.

But for me as a Black woman of Gen X, just like Stacey, I want to end where I began — she deserves our respect, our thanks and our enduring gratitude for showing America that patriots don’t just exist in history books. That patriots are not just white men wearing wigs from the 18th century. That Patriots step up when their country is in need, and they dare to go where others have not gone. Stacey gets it. She understands the true meaning of “E pluribus unum” — out of many, one.

As for what’s next for Abrams, only she can say. But if the past two years are a guide, Stacey Abrams will be the next governor of Georgia in 2022. And I will be one of the first to offer my support and donate to her campaign from Virginia. We may not agree much politically, but she defended election integrity and American democracy when we needed her most.

History will look back on this time and it will count her among the names of Americans who literally saved this republic from Trump and Trumpism.