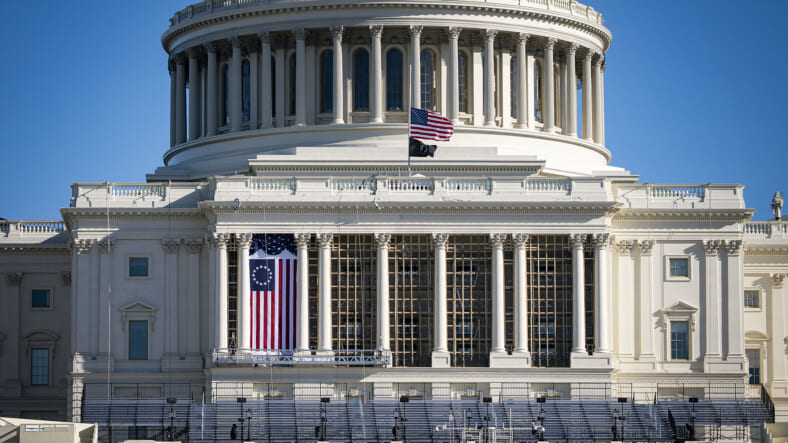 The American flag flies at half-staff as inauguration construction continues on the West Front of the U.S. Capitol on January 9, 2021 in Washington, DC. (Photo by Al Drago/Getty Images)

There is a “greatly increased security posture” in and around Capitol Hill and the White House after last week’s deadly attack.

Since the deadly Capitol Hill attack on Jan. 6, security around the Capitol and White House and other federal buildings have been enhanced as the chatter of more threats of armed marches have been reported. The concern is not only in Washington D.C. but also in other state capitols around the country. Law enforcement is tracking fliers that are circulating on social media, particularly on conservative sites.

Officials are looking for the originators of the fliers to possibly derail the threats. It is against the law in Washington D.C. for open gun carry and concealed weapons are by permit in D.C. — a permit that is not easy to secure.

A high-ranking law enforcement official who wishes not to be identified exclusively told theGrio that there will “absolutely” be increased security leading into Inauguration Day, in which President-elect Joe Biden and Vice President-elect Kamala Harris will be sworn into office.

Part of the standard daily security measures around the White House, Capitol Hill and the National Mall are security cameras that are not visible. Those cameras are now integral in the scramble to identify the rioters from last Wednesday’s tragic and historic riot.

Also, the rioters’ confessions on their social media pages are helping law enforcement find the culprits. However, there are more avenues to find those who participated in the deadly attack. There are reports authorities have begun placing some of the domestic terrorists on a no-fly list so they can’t come back to D.C. for the proposed next round of violent marches.

After the phone records are obtained of those in that area on that date and time, law enforcement will then match names with driver’s license pictures. The pictures will be scanned against videos of rioters to find the culprits of the deadly attack.

Intelligence and law enforcement officials are offering warnings leading up to the inauguration. They are urging people to stay away from state capitols and the U.S. Capitol in the lead up to the Joe Biden inauguration.