OPINION: Jason Johnson reflects on past Black heroes who saved lives and democracy and yet are absent from public memory 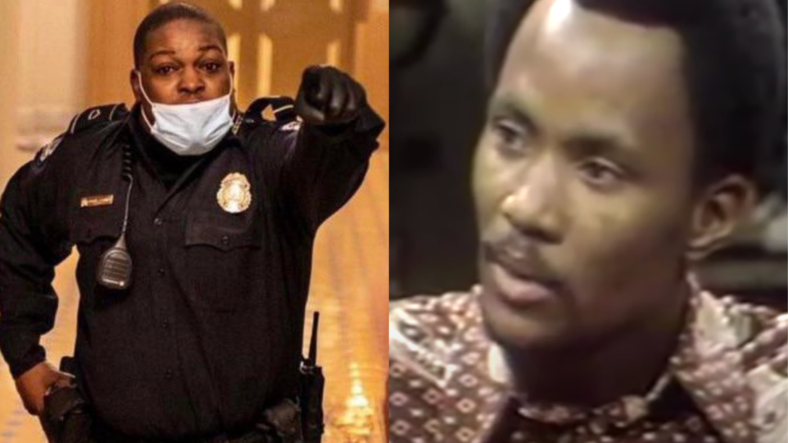 Once upon a time, there was a Black security guard who saved American Democracy. His quick thinking and eye for detail allowed him to stop an organized group of Right Wingers who had broken into important government offices looking for information to help them overturn the will of the people.

This man was hailed as a hero, but you’ve probably never heard of him.

You may think I’m referring to Eugene Goodman, the Black Capitol Hill police officer who faced off against a horde of MAGA terrorists and saved the U.S. Senate. However, I’m actually talking about another Black man who saved Democracy, Frank Wills, who stopped the 1972 Watergate break-in, which changed the course of American history.

Yet for such a momentous accomplishment, Wills died relatively unknown and penniless, while others, almost entirely white men, came to fame and fortune from the Watergate scandal. Black people are often praised as heroes for saving a country that treats us like third-class citizens, yet when it comes to the fame, fortune, even historical reverence associated with those great deeds, we’re left by the wayside.

In the wake of last week’s terror attacks on Congress, now is a good time to remember that if we don’t keep the names of men like Eugene Goodman on our lips, in no time he’ll fade into a whisper of history because it’s happened before.

It is not hyperbole, exaggeration or an opening pitch of a TV movie (do they even make those on network TV anymore?) to say that Eugene Goodman saved American Democracy on Jan. 6, 2021. As experts, tacticians and military veterans have pointed out, when you see the video of his confrontation with MAGA terrorists in the Capitol it was his quick thinking that saved the day.

First, Officer Goodman distracted the terrorists from noticing an open door to the Senate chamber, where members were still inside and defenseless. He then began leading the terrorists away from the Senate, and when it looked like the group was heading back to the Senate chamber he pushed the terror leader, Doug Jensen, pissing him off and engaging the mob just long enough to lead them into trap where other officers were waiting to arrest the whole group.

You know how in every Jurassic Park movie, there’s some brave guy running through the rain with a red flare distracting a T-Rex from killing all the nerdy scientists? Eugene Goodman is that guy, plus Jason Bourne.

African American patriotic heroism is always a curious spectacle. Often white political observers and politicians will praise Black people for their bravery, privately in awe of a people who continue to risk their lives for a country that will still barely let them vote. Even Black political observers often express mixed emotions about moments of ‘patriotic’ valor. On the one hand, wanting to praise great heroism and on the other thinking, was this Black man or woman really getting paid enough to take all that smoke for a person or institution that seldom treats us as equals?

This is especially the case with Black cops and security guards who are often victimized by white supremacy both within their professions and by the institutions they protect. It’s akin to the superhero X-Men team, who were created as an allegory for the Civil Rights struggle of Black Americans in the 1960s.

The X-Men are heroes who are “Sworn to protect a world that hates and fears them.” In other words, use their skills and unique gifts even in defense of those who might actually do them harm. It’s not too far of a rhetorical or ideological leap from comic book heroes to a real-life Black officer who’s job is to “protect and serve” Senators who are open white supremacists and white nationalists.

Read More: Can we talk about the Republican Party’s white women problem?

However, it’s in the aftermath of Black heroism that the true character of America is revealed, over and over again. After a brief moment of praise for saving America in 1972, Frank Wills was more or less left by the wayside of history. Like any American hero he wanted to capitalize on his success, but none of that was forthcoming for a Black American hero.

According to interviews, Wills never even got a raise for Stopping the Steal at the Watergate, and bounced around from job to job for years. He was acutely aware of how his heroic act worked out for everybody except for the actual guy who did the deed. During the 25th anniversary of Watergate when he was again briefly lifted out of obscurity, Wills expressed his displeasure in an interview with the Boston Globe.

“I put my life on the line. I went out of my way … If it wasn’t for me, Woodward and Bernstein would not have known anything about Watergate,” he said at the time.

Not just Woodward and Bernstein wrote best-selling books and made hit movies off of the Watergate scandal, but G. Gordon Liddy, who was part of the break-ins, went on to an incredibly successful media career. As for the actual hero? Frank Wills eventually returned to Augusta, South Carolina to care for his sick mother. When she finally passed in 1993, they were so poor he had to give her body up to science in order to afford a funeral. He died 7 years later at the age of 52 with no fanfare. No one was offering him a television show, or a security consulting contract.

Wills isn’t the only Black cop who saved Democracy who’s been relatively lost to history. Remember Crystal Griner and David Bailey? They were assigned to protect Steve Scalise (R-LA), the then-House Majority Whip, when a mass shooter attacked the annual congressional baseball game in 2017. Griner was shot in the leg, and Bailey took shrapnel, but they still managed to return fire and neutralize the shooter, preventing him from massacring Congress and sending our Democracy into a tailspin.

They were both given medals and awards, but how were they repaid by Scalise himself? He continued to be the pro-gun homophobic politician he’d always been, an insult to both and a double insult to a queer Black woman like Griner. Was Griner or Bailey hired away from the Capitol Hill police to be cable news security analysts? Is Netflix streaming a new buddy cop series about their exploits?

This is not to say that Black heroism must be rewarded financially, but we live in a country where talk show hosts give people free cars for getting caught walking a senior citizen across the street. Saving America may not have a price tag but Black folks shouldn’t have to do it for free either.

Before this insurrection is over, there will be more Black heroes, more Eugene Goodmans and Crystal Griners and David Baileys. Black men and women who risk their lives to keep this country safe while white lawyers, teachers and businessmen fly into Washington, D.C. for the weekend to LARP as revolutionaries. These Black heroes, men and women may want nothing more than to return to a normal life, and shun the spotlight. Or they may have more to give to the world as experts, advisors and living witnesses to history.

Regardless, we should keep their names in the public conscience, a reminder of their bravery, of what heroism in the face of bigotry looks like, and what it means to protect and serve those who hate and fear you. America will need more Eugene Goodmans, and we have to do everything we can to make sure they aren’t thrown in the dustbin of history like Frank Wills.