Outgoing president, Donald Trump, refused to uphold any of the long-standing traditions that would ensure a peaceful transfer of power to new president, Joe Biden, and his wife, Melania, also bucked protocol when she declined to provide her successor, Dr. Jill Biden, with a tour of the White House.

The Bidens were falsely accused of firing the White House’s chief usher on their first day in the residence, as previously reported by CNN. It turns out that it wasn’t the new president and first lady who gave the chief usher, Timothy Harleth, his walking papers — it was the Trumps.

Donald and Melania Trump sent White House ushers home early on Inauguration Day in one of their last acts in a tense presidential transition, according to Raw Story.

“The Trumps sent the butlers home when they left so there would be no one to help the Bidens when they arrived,” the official said. “So petty,” said a well-placed official not associated with the Biden team.

Other knowledgeable sources confirmed that Harleth, a former executive of Trump Hotels hired by Melania Trump, was fired by the outgoing president and first lady — and not by the Bidens, as was widely reported afterward. 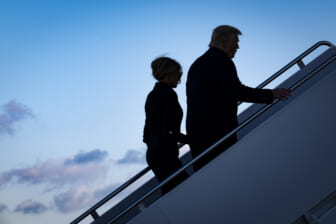 Harleth had already vacated the premises by the time Joe and Jill Biden arrived at the White House on Wednesday afternoon, leaving no one in place to open the doors for their inaugural entry and leading to an awkward pause.

“It’s a big protocol breach for the president to ever stand in front of a closed door at the White House,” said a veteran White House social expert. “That may be why there was nobody to open the doors to the Bidens. You couldn’t expect the Biden staff to know to do that. Doors are opened and closed by ushers. There are rules about all these things and everyone has their job.”

The rest of the usher staff was back on the job Thursday, but Harleth — considered to be a Trump loyalist — was not expected to be retained by the Bidens for long, Raw Story reported.