According to the lawsuit, the Ivy League illegally discriminated against Asian American and white students in admissions. 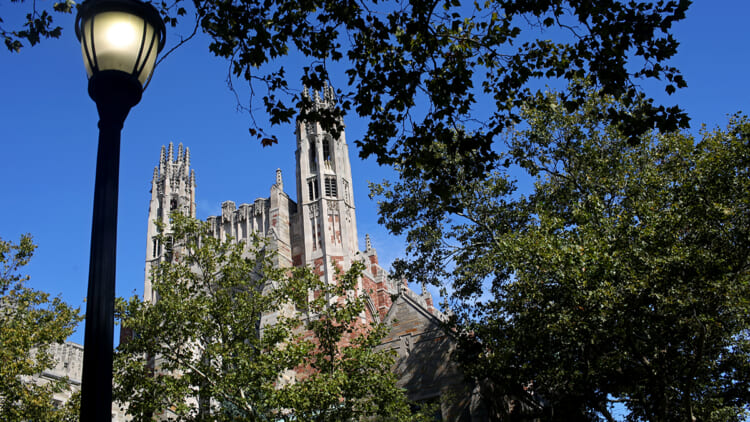 Yale University Law School is shown on the day the U.S. Senate Judiciary Committee was holding hearings for testimony from Supreme Court nominee Brett Kavanaugh and Dr. Christine Blasey Ford on September 27, 2018 in New Haven, Connecticut. Blasey Ford, a professor at Palo Alto University and a research psychologist at the Stanford University School of Medicine, has accused Kavanaugh of sexually assaulting her during a party in 1982 when they were high school students in suburban Maryland. (Photo by Yana Paskova/Getty Images)
Loading the player...

The lawsuit poised against Yale University by the Department of Justice, which claimed potential students had been discriminated against due to race, has been dropped.

According to NBC News, the Justice Department notified a federal judge Wednesday that the lawsuit, brought by the former President Donald Trump administration, has been dismissed. The case was part of Trump’s move to discredit affirmative action programs that many conservatives consider unlawful, the outlet reported.

In a brief filing, the U.S. District Court in Connecticut issued a notice of the government’s “voluntary dismissal of this action.”

theGrio reported the lawsuit resulted from a two-year investigation after allegations by Asian American groups that their race was a factor in hundreds of admissions decisions. A 2016 complaint against Yale and several other Ivy League schools, including Brown University and Dartmouth College, initiated the inquiry.

According to the report, in the lawsuit, the DOJ claimed that Yale’s admissions process violated Title VI, the 1964 Civil Rights Act.

“All persons who apply for admission to colleges and universities should expect and know that they will be judged by their character, talents, and achievements and not the color of their skin,” Assistant Attorney General Eric Dreiband for the Civil Rights Division said in a statement. “To do otherwise is to permit our institutions to foster stereotypes, bitterness, and division.”

“Our admissions practices are completely fair and lawful. Yale’s admissions policies will not change as a result of the filing of this baseless lawsuit. We look forward to defending these policies in court.”

Although Salovey was prepared to defend their admissions processes, the case will not go before a judge. According to NBC News, the move was part of President Joe Biden‘s administration reversing many of Trump’s actions. The legacy institution was satisfied with the decision.

“Our admissions process has allowed Yale College to assemble an unparalleled student body, which is distinguished by its academic excellence and diversity. Yale has steadfastly maintained that its process complies fully with Supreme Court precedent, and we are confident that the Justice Department will agree,” it said in a written statement according to the news outlet.

According to Yale facts and statistics, as of April 2020, 52.7% of its student body is white, 19.3% are Asian, 13.3% identify as Hispanic, 7.7% are Black, and 6.5% identify as more than one race. The campus also has a 21% population of international students, with China, Canada, India, South Korea, United Kingdom, and Germany having the highest amount of students.