“Yesterday's shootings are another tragic reminder that we have far more work to do to put in place commonsense gun safety laws and root out the pervasive patterns of hatred and violence in our society,” tweeted Obama 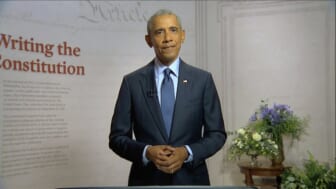 Barack Obama is speaking out against the recent gun violence in Atlanta.

On Tuesday, a man suspected of killing almost a dozen people was taken into custody. The former president addressed the issue via Twitter and said it is a reflection of the lack of gun safety laws.

“Even as we’ve battled the pandemic, we’ve continued to neglect the longer-lasting epidemic of gun violence in America. Although the shooter’s motive is not yet clear, the identity of the victims underscores an alarming rise in anti-Asian violence that must end,” tweeted Obama on Wednesday.

Read More: Michelle Obama aims to give a million meals in new campaign

“Yesterday’s shootings are another tragic reminder that we have far more work to do to put in place commonsense gun safety laws and root out the pervasive patterns of hatred and violence in our society.”

“Michelle and I pray for the victims, their families, everyone grieving these needless and devastating killings—and we urge meaningful action that will save lives.”

The suspect, Robert Aaron Long, 21, of Woodstock, Georgia is being accused of killing six Asian people and two White people. Officials are unclear on if this was a hate crime against Asian Americans and have labeled the motive as “unknown,” per CNN.

The gunman was apparently on his way to Florida to “perhaps to carry out additional shootings.”

Long was found and arrested on Interstate 75 during at a traffic stop Tuesday night. He is being held in Cherokee County on four counts of murder and one count of aggravated assault.

The gunman attacked Young’s Asian Massage located between Woodstock and Acworth in Georgia on Tuesday afternoon, leaving two dead at the scene and two later died after being taken to the hospital.

Then an hour later on Piedmont Road in Atlanta at Gold Massage Spa officers responded to a call and found three people dead.

While officers investigated Gold Massage Spa  they received a call about Aroma Therapy Spa located across the street. One person was discovered dead.

Mayor Keisha Lance Bottoms of Atlanta spoke out and said:

“Whatever the motivation was for this guy, we know that the majority of the victims were Asian,” she said per The New York Times. “We also know that this is an issue that is happening across the country. It is unacceptable, it is hateful and it has to stop.”

Chief Rodney Bryant, the acting chief of the Atlanta Police Department also spoke out and said:

“We are still early in this investigation, so we cannot make that determination at this moment,” said Bryant. “We are just not there as of yet.”