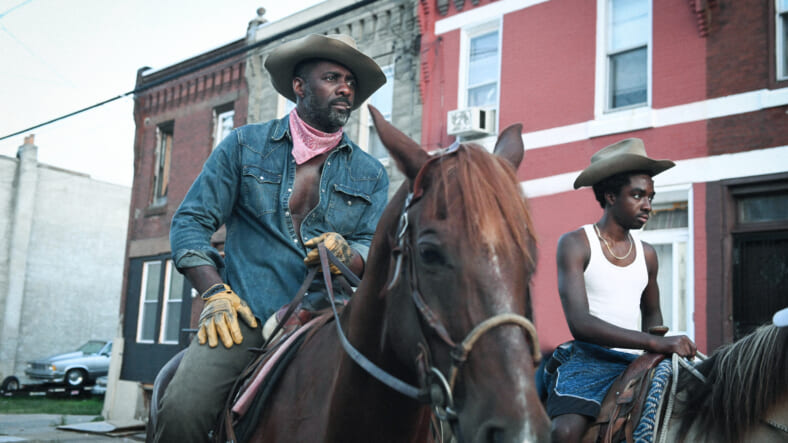 When fifteen year-old Cole (McLaughlin) is expelled from school in Detroit, he is sent to North Philadelphia to live with Harp (Elba), his estranged father. Harp finds solace in rehabilitating horses for inner city cowboys at the Fletcher Street Stables, a real-life black urban horsemanship community that has provided a safe haven for the neighborhood residents for more than 100 years.

Torn between his growing respect for his father’s community and his reemerging friendship with troubled cousin Smush (Jerome), Cole begins to reprioritize his life as the stables themselves are threatened by encroaching gentrification.

When theGrio caught up with Elba to discuss the project that features tons of horses, we learned that the heartthrob had some serious issues with his four-legged costars.

“I’m allergic to horses,” he revealed. “So, you know, the first few times were very difficult. My eyes tearing up and swelling and, you know, skin irritations… all kinds.”

Despite his body’s rejection of the creatures, Elba admits it was worth it in the end.

“I fell in love with the connection. The horse doesn’t let you get on its back if it doesn’t want you to be on its back. It would just let you know that you have to get off.”

Fortunately for Elba, there was an unusual remedy that seemed to keep his horse allergies under control better than antihistamines. “Pickle juice,” he says. “You drink some pickle juice and it really helps.”

Elba also explained why the untold story of the Fletcher Street Stables and the long-standing, Black cowboy culture of Philadelphia was important to tell.

“I think that more than any other time, people want to give a sense of where they are, who they are, where they’ve come from, and I think that’s why this story, being a very small story about Philadelphia, really represents people that don’t have as much of a voice and it’s sad nobody knows about them,” he says.

“This is their land. This is where they come from. And that’s why it’s important more than any time recently. This time it’s important to show where you’re from and hopefully that resonates with the film.”

Check out our full interview with Idris Elba and Caleb McLaughlin, above.