The quest for D.C. Statehood inches closer to victory

Congresswoman Eleanor Holmes Norton and others have led the fight in establishing the District of Columbia as a state. 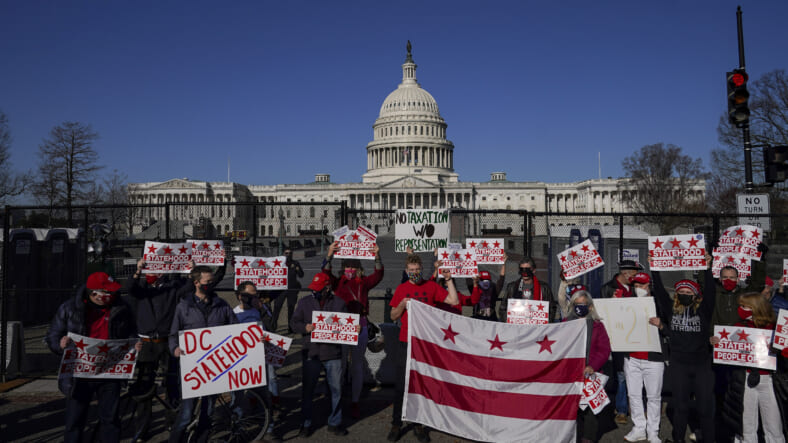 Residents of the District of Columbia rally for statehood near the U.S. Capitol on March 22, 2021 in Washington, DC. (Photo by Drew Angerer/Getty Images)

Washington, D.C. has long been recognized as the capital city of the United States and enjoys the designation along with being the seat of the federal U.S. government.

For decades, a growing collation of activists and proponents engaged in a long-simmering battle for D.C.’s statehood rights are inching closer to victory and that fight has greater implications for the nation at large as well.

Read More: Statehood for DC could come sooner than Puerto Rico — here’s why

Speaking with theGrio about this issue, Howard University’s Department of Political Science Chair Dr. Ravi Perry and DC Vote Executive Director Bo Shuff lent their time and expertise to explain the importance of D.C. statehood, why it matters, and most especially why it should be important to those living outside the city.

For context, the D.C. statehood movement began long before variations of the “Taxation Without Representation” slogan became prominent on the license plates of city drivers some two decades ago. In the late 19th century and early 20th century, representation was a topic of discussion and the first congressional hearings about the matter were first heard in 1921, leading to a stalled bill that would’ve given the city rights as if it were a full state.

Renewed efforts for representation in Congress found itself pushed along by way of the fervor of the Civil Rights Movement in the late 1950s, which led to the passage of the Twenty-Third Amendment to the United States Constitution in the early 1960s. This gave the city three electoral college votes in the presidential election as if it were a state.

On March 22, a debate was held for H.R. 51, or the Washington, D.C. Admissions Act, with D.C. standing for Douglass Commonwealth in honor of famed city resident Frederick Douglass.

From Bo Shuff’s viewpoint, the matter of statehood is about recognizing the 700,000-plus residents of the city essentially have no say in the larger congressional process as they are without the House and Senate seats that would push for laws that represent the will of the people. He explained that DC Vote was established to bring equality across a variety of issues to the District of Columbia and its residents.

The organization itself has been involved in varying intervals of the statehood movement but that changed dramatically around five years prior.

“In 2016 when Mayor [Muriel] Bowser and the statehood commission put the initiative on the ballot and statehood passed, and it was shown that 86 percent of the population stood in favor of statehood,” Shuff began.

“So we shifted focus and decided to work on how to get this bill passed. The thought process in 2016 was if we passed in the ballot, and you have a Democratic president, and a Democratic Congress, that it would just sort of happen. But the complete opposite happened at the federal level, but it gave us a chance to step back and wonder what if it did happen,” Shuff added.

DC Vote then moved to work with various stakeholders in the movement, including the Mayor’s Office and the statehood commission, but also with the longstanding activist groups that were established before them, forming a strong coalition of voices citywide.

Shuff stated that supporters frame statehood as a voting and civil rights issue along with fundamental representation as a state, thus ending taxation without representation. With residents paying more tax than 22 states and the highest tax per capita in the nation, this would all make more sense if Washingtonians had actual representation within the hallowed halls of the U.S. Capitol.

Dr. Ravi Perry, who is a sitting DC Vote board member, spoke directly to the fight for statehood firstly as a civil rights issue and then a voting rights issue, noting the link isn’t cosmetic but actually necessary.

“Here we have some 700,000 people who are told that they are benefitting from inclusion and representation except when it comes to the matters in Congress, which, of course, where our powers are realized in the government that is supposed to represent us,” Perry continues.

Perry adds, “But if you don’t have those representatives there, then it literally is saying that your voice doesn’t matter at the government’s highest level. We’ve had debates dating back to the 1700s about who counts in this country, for lack of a better term. From the three-fifths a person designation, which was about partial recognition, to slave states, and the framing of the U.S. Constitution at the time, and while that spoke to the fullness of a human being, it was also the political lack of worth and here we are in 2021 and we’re facing the same issues.”

As noted, Perry has tackled these concerns in his books “Black Mayors, White Majorities: The Balancing Act of Racial Politics” and again in “21st Century Urban Race Politics: Representing Minorities as Universal Interests.”

Perry continually pointed to not only the fact that city residents are paying federal taxes at a level that surpasses other states, but that Washington is the only capital city in the developed world where people who reside there have no say as to what happens at the federal level. However, Perry addressed the fact that race cannot be ignored as a reason why barriers to full representation have been erected in the first place.

“We know that the historical composition of the people who live in this city are people who are brown, and Black have been deemed not to represent the values of the nation despite being promised equality,” said Perry.

“So from a political science standpoint, we have to ask if political representation for all people is truly the goal, and if so, then the question becomes why it hasn’t happened because the Fourteenth Amendment of the Constitution states that you should have equal protection under the law.”

In asking about what he took away from the recent H.R. 51 hearing and the Republican Party’s seemingly brisk opposition to the bill, Perry noted that the Republicans’ talking points could largely be framed as ignoring the will of the city’s Black and largely Democratic Party residents. Perry also pointed to the fact that the GOP frames itself as the upholders of the Constitution and the irony that their side has pushed against statehood while clearly taking a veiled swipe at the city’s minority population.

Both Shuff and Perry are Washington transplants but, like many who reside in the city, have expressed true pride in flying the flag of three stars and two bars.  The pathway to statehood has never come into the spotlight as much as it has now considering that the Democratic Party holds a slim majority in Congress. Time will tell if the efforts yield the deserving fruit of full statehood rights and representation.