Easter Sunday for Christians around the world is one of the holiest days of the year as it recognizes the resurrection of Jesus Christ three days after his crucifixion. Ironically, this Easter Sunday also marks the 53rd anniversary of Dr. Martin Luther King Jr.‘s assassination.

On the balcony of the Lorraine Motel in Memphis, Tennessee, King was killed at the young age of 39. In a recent interview with theGrio, Dr. King’s daughter, Bernice King, spoke on the harrowing details of her father’s autopsy pictures. The graphic images, she recalled, showed that Dr. King’s whole jaw had been shot off.

King also maintains a stance taken by the King family that his death was a multi-governmental conspiracy.

In efforts to keep his great work alive, there were massive plans to commemorate his life’s work. Dr. King is the only American civilian honored with a national holiday and larger-than-life statue on the National Mall in Washington. It is also safe to say the vast majority of urban cities have a street named and dedicated to the minister and civil rights icon.

King pushed nonviolence for first-class citizenship for Black America when all rights for Blacks were challenged in the United States, particularly in the racist Jim Crow south.

In the midst of great racist oppressive opposition, Dr. Martin Luther King Jr. led a movement that grew in momentum and success. Decades after his death, during the presidency of Ronald Reagan, Dr. King’s efforts were championed by many. In the 1980s, the public and prominent figures rallied for a King national holiday, including his widow, the late Coretta Scott King, music legend Stevie Wonder and members of the Congressional Black Caucus.

Former New York Congressman Ed Towns remembers the push for the King federal holiday in the early ’80s and the simultaneous investigation of the federal government’s involvement in the assassination of the civil rights leader. Towns told theGrio that “there was not enough time and energy” given to the original probe of King’s assassination. 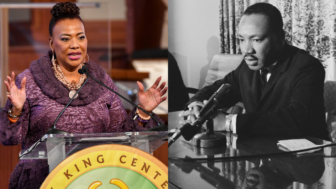 Bernice King strongly contends there is still a search for answers as the assassination of her father was a culminated effort involving “federal, state and local governments,” including the “Memphis Police Department.”

More than half a century after his assassination, Bernice King told theGrio that James Earl Ray, the man convicted in Dr. King’s murder, “was used as a diversion with the gun that he had.”

“I’ve heard of other people working on stories around these assassinations, you know, different ones in combination with Kennedy or with Evers and Malcolm and our family. There are a lot of different ones that are percolating,” King added.

“They’re going to keep doing that because people are not convinced of the official story that people keep giving … They know the truth.”

In 1999, the year of the King family’s private investigation into her father’s death, Bernice King was the first one in her family bold enough to see her father’s autopsy photos. She believes the precision of the shot was to meant to send a message.

“Everybody else wasn’t ready,” King said. “When I looked at those autopsy pictures, the whole jaw, gone. I mean, and it was it was like he was in mid-sentence, even though he may have been or may not. But it looked like that.”

King explained, “I thought about the notion that as far as the gunshot rings out, it was like saying, ‘now shut your mouth.’

Initially, King reached out to set the record straight that her father was the first person the federal, state, and local governments conspired against and assassinated.

In a previous interview with theGrio, Illinois Congressman Bobby Rush, the co-founder of the Chicago Black Panther Party, said that Fred Hampton was the first United States citizen who was conspired against and assassinated by the U.S. government. The death of Fred Hampton was Dec. 4, 1969.

“We had a civil trial that we opened,” King said. “[We proved] that it was a conspiracy that involved federal, state, local and even, you know, the mafia that was involved in the assassination of my father.”

The federal government has long acknowledged that it compiled an extensive file while investigating Dr. King. Former FBI Director, James Comey, previously shared that when new recruits came into the agency he would take them to the King Memorial and open up the FBI’s King file to show and remind them what federal overreach looked like.

However, beyond who the entity or entities responsible for Dr. King’s death more than half a century ago, Bernice King said her father’s legacy “gave us a blueprint.” She emphasized the need now more than ever to hold onto “his nonviolent teachings.”