"I just love that text because it shows Kobe's competitive nature," said Jordan. 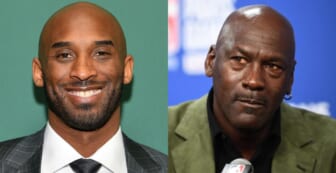 Michael Jordan is still struggling with the death of Kobe Bryant.

The NBA star recently told  ESPN’s Jackie MacMullen that he spoke with Bryant by text just weeks before his passing. The two were simply catching up over the holidays, as reported by TMZ.

“This tequila is awesome,” said Bryant to Jordan during the  Dec. 8, 2019 exchange. The Charlotte Hornets Chairman had sent him a bottle from his liquor brand.

“Thank you, my brother,” Jordan responded.

Jordan added that the text was in reference to his daughter Gianna Bryant‘s team.

“I just love that text because it shows Kobe’s competitive nature,” said Jordan to ESPN. He added: “I don’t know why, but I just can’t delete it.”

Bryant, 41, and his daughter Gianna ,13, passed away from a helicopter crash on January 26, 2020. Nine people in total died on the plane that crashed into a hillside near Calabasas, California.

MJ referred to Bryant as his “little brother,” so it was only right that he deliver a speech at the late player’s memorial last February at the Staples Center in Los Angeles. He recalled being nervous that his emotions would get the better of him.

“I was thinking, at first, I might be a little somewhat nervous about it, but then I realized I’m not going to be nervous about showing emotions for someone I absolutely loved,” Jordan said “That’s the humanistic side of me — people tend to forget I do have one.”

Jordan opened his remarks by expressing his gratitude to Vanessa Bryant and the family.

“I’m grateful to be here to honor Gigi and celebrate the gifts that Kobe gave us all – what he accomplished as a basketball player, as a businessman, and a storyteller and as a father. In the game of basketball, in life, as a parent – Kobe left nothing in the tank. He left it all on the floor,” Jordan said during the memorial.

He concluded the speech with: “I promise you from this day forward, I will live with the memories of knowing that I had a little brother and I tried to help in every way I could. Please, rest in peace little brother.”

According to NBC News, the firefighters of the Los Angeles County Fire Department  who responded to the crash are being terminated for allegedly taking photos at the scene.

Two of the first responders were sent “intention to discharge” letters back in December. An investigation concluded the images they took  “served no business necessity” and “only served to appeal to baser instincts and desires for what amounted to visual gossip.” The individuals apparently showed the images to their wives and girlfriends.

A third responder was suspended because he was apparently a media relations officer and instructed to interact with the press.