Opinion: Dr. Jason Johnson says the newly announced film adaptation of the Black-created comic, "Bitter Root," will be the next cult classic -- and may see King bring home an Oscar. 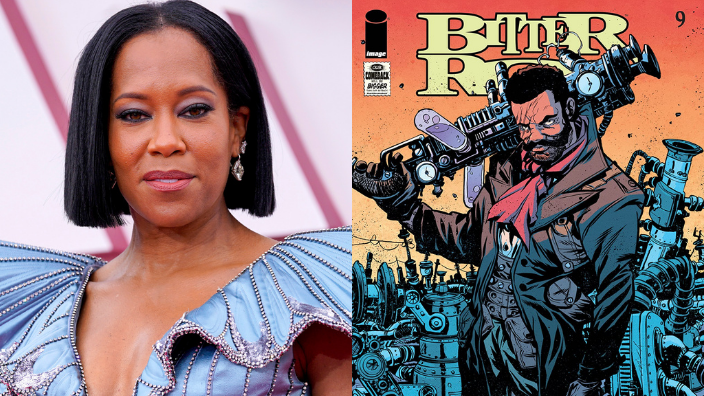 There’s always something special about being down with something before it goes mainstream. Remember how you felt way back in the early aughts watching Awkward Black Girl on Youtube? And then when Issa Rae blew up with Insecure on HBO you were like “I BEEN knew Issa was hilarious.”

Last year, when America discovered Watchmen, comic fans from the ’80s were thrilled to see stories they’d been talking about for years finally hit the air. Imagine being someone who was a fan of Trevor Noah’s comedy all the way back in South Africa, when the announcement was made in 2015 that he’d be taking over The Daily Show.

If you’ve ever had any of these feelings you can understand how excited I was to hear that Regina King has been tapped to direct the film adaptation of the Eisner Award-winning comic series Bitter Root for Legendary Pictures.

Bitter Root is like a combination of Ghost Busters and Blade, with the steampunk energy of Attack on Titan and the family drama of Lovecraft Country. With Regina King at the helm, you should be very excited.

While over the last five years Hollywood studios have produced more Black science fiction and fantasy content, it’s mostly come from two sources. Either Black characters created by white artists decades ago (Black Panther, Black Lightning on the CW) or fully integrating Black characters into existing genres or universes where they previously didn’t exist or were underutilized (Watchmen, Falcon and Winter Soldier on Disney Plus and Yasuke on Netflix).

The quality of these shows and movies have varied immensely, from the brilliant and culture-altering Black Panther to the un-even and highly problematic racial and sexual dynamics of Watchmen to the muddled ALL Lives Matter mash-up that was Falcon and Winter Soldier. What will make the Bitter Root film unique is that it is a Black-owned, Black-created storyline steeped in the history of the Harlem Renaissance and the Great Migration.

This is not a story where Blackness had to be shoe-horned into a white world or problematic characters have to be updated to modern sensibilities, Bitter Root actually exists at the nexus of Black science fiction, pulp adventure and history. The addition of Regina King, who’s shown she has adventure chops having directed episodes of Southland, Animal Kingdom and the recent One Night in Miami, and Ryan Coogler producing means that this will be an authentic Black experience, and not a watered-down farce.

I first stumbled on the comic back in 2019 at the DragonCon comic book convention in Atlanta, Georgia where I met two members of the creative team, and at the time, they’d already been optioned by Legendary Pictures. By that fall I was a fan of the book, and here’s what I wrote at the time.

Then we talked to Chuck Brown and Sanford Greene, creators of Bitter Root, a steampunk fantasy comic about a family of Black demon busters that just got acquired as a film project for Legendary Pictures. (I highly recommend the book; I used it in my comics class at Morgan State).

Great director, great producer, huge studio, but all of this begs the question: What is Bitter Root actually about? And more importantly, how can you get down with this story before it gets colonized by the mainstream media outlets?

Bitter Root is the story of the Sangerye family, Black family of demon hunters during the Harlem Renaissance, that has been secretly protecting the world from Jinoo for hundreds of years. Jinoo are spirits that cross over to our world and possess men and women filled with hate and intolerance, transforming them into living monsters. Needless to say, the Jinoo have a tendency to possess angry white mobs during bloody race riots, abusive cops and all manner of racists and bigots during the American apartheid of the 1920s.

Once someone’s been infected with a Jinoo you can use bitter roots, potions and magic to release them, or advanced tech, weapons and fighting skills to kill them before they can hurt anyone else. After terrible family casualties at the hands of Jinoo during the bloody summer of 1919 and the Tulsa attacks of 1921, the Sangerye family is at a crossroads as to whether some of these Jinoo want to be saved, or should be.

Bitter Root has all of the classic characters to get you invested in fantasy films. There’s the wise grandma holding the splintering family together, the headstrong “Blink” who wants to take the fight to the Jinoo but is held back because she’s a woman, her cowardly cousin, Cullen, who’s mad he’s been drafted into the family business, and there’s even the badass, Han Solo/Green Ranger Uncle Ford who would rather kill Jinoo than save anyone who’s possessed.

One of my Morgan State students summed up her feelings about the book after my class had one of the Bitter Root creators, Sanford Greene, visit us to give insight on the creative process:

After reading the book I feel I’ve stumbled across some Jinoo in my hometown of Colorado Springs. Blink’s character stood out to me the most because she not only had to battle Jinoo but patriarchy. She clearly could fight just as well as her male family members but was constantly told to stay back. I felt two things after reading the book: I felt empowered and seen. This comic and the impending movie have the potential to impact the black community like Black Panther did in 2018.

If you like vampires, family drama, anti-racism, crazy steam-punk era weapons and kick-ass fight scenes you’ll love Bitter Root. The comic is only on issue #12 and the first 10 issues can be picked up in a collected volume. If those are sold out, don’t worry, there’s a special Juneteenth edition of the books coming out in a few weeks.

Go out and grab a copy of the books now, because when this movie hits theaters and Regina King gets an Oscar nomination for best director, you’re going to want to be one of the folks saying “You were there” from Day One.