Kardashian bought it at a Julien's auction benefitting children in need held in honor of the pop icon’s 55th birthday.

An auction in honor of a pop icon’s 55th birthday titled “Iconic Treasures From the Legendary Career and Life of Janet Jackson” lit up social media this weekend. 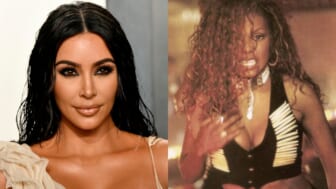 Kim Kardashian announced she’d purchased an outfit from the collection. The suede top with artificial bone detail and black pants with a lace-up front were part of her costume in the 1993 music video for her single, “If.”

“Happy birthday queen!” Kardashian wrote in Instagram Story, also sharing a clip of Jackson wearing the outfit. “For @janetjackson’s bday bc I’m such a fan I can’t believe I won this on juliens_auctions.”

Jackson replied to Kardashian in her IG story, writing, “Thank u so much @kimkardashian! I hope ‘IF’ gives u as much pleasure as it did me,” adding three kissing face emojis.

Julien’s Auctions had announced the win on Twitter. “SOLD for $25,000! A custom-made top with a pair of black pants, both worn by Janet Jackson in her 1993 award-winning ‘If’ music video.” But they didn’t disclose the auction winner was Kardashian.

“If” was a popular single from Jackson’s eponymous album, Janet, which also featured the hits “That’s the Way Love Goes” and “Any Time, Any Place.”

The auction featured many pieces of varying value. A replica of Jackson’s tour journal sold for $16,000, while an Aston-Martin that she had previously driven sold for $70,000.

Television writer and director Matthew A. Cherry shared that he had made a few purchases during the three-day event, writing: “Me leaving @JuliensAuctions with a few items from @JanetJackson’s auction” with a hilarious GIF of Tracee Ellis Ross.