"It's time for the newsrooms to do better and build teams that reflect the make-up of our city," she stated. 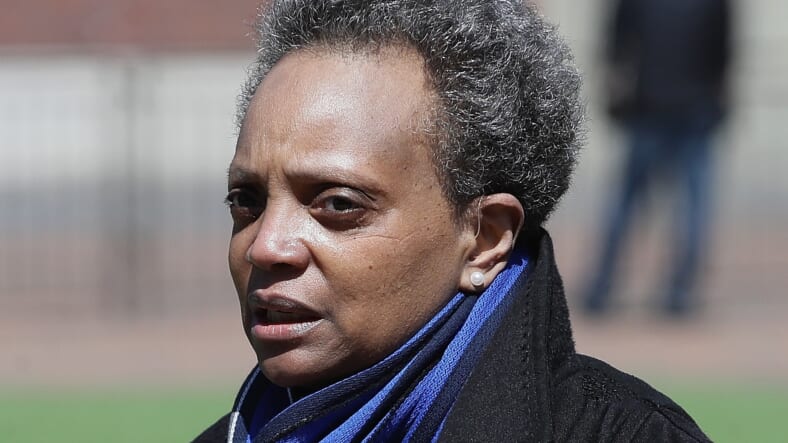 Chicago’s top elected leader is making a unique decision: Lori Lightfoot will grant media requests to the city’s press outlets marking her midway point as mayor, but she will exclusively interview with journalists of color.

Mayor Lightfoot made the announcement public in a five-part Twitter thread yesterday, writing, “I ran to break up the status quo that was failing so many. That isn’t just in City Hall. It’s a shame that in 2021, the City Hall press corps is overwhelmingly White in a city where more than half of the city identifies as Black, Latino, AAPI or Native American.”

“Diversity and inclusion is imperative across all institutions including media. In order to progress we must change,” she continued. “This is exactly why I’m being intentional about prioritizing media requests from POC reporters on the occasion of the two-year anniversary of my inauguration as mayor of this great city.”

Lightfoot concluded: “We must be intentional about doing better. I believed that when running for office. I stand on this belief now. It’s time for the newsrooms to do better and build teams that reflect the make-up of our city.”

The interviews will apparently be conducted on a single day, according to Ryan Johnson, Lightfoot’s deputy communications director. He tweeted that the mayor “picked one day out of 365 to exclusively provide one-on-one interviews with journalists of color ahead of her two-year anniversary.”

”That shouldn’t be controversial,” he maintained. “The lack of diversity in the media is.”

“In the time since I was elected, our country has faced an historic reckoning around systemic racism,” Lightfoot wrote. “In looking at the absence of diversity across the City Hall press corps and other newsrooms, sadly it does not appear that many of the media institutions in Chicago have caught on and truly have not embraced this moment.”

She noted “In the year 2021, with a Black, lesbian Mayor, a Black woman City Treasurer, a Latinx woman City Clerk, and a majority Black and Latinx City Council, the group of reporters assigned to cover City Hall is practically all white. Many of them are smart and hard-working, savvy and skilled. But mostly white, nonetheless. Indeed, there are only a handful of beat reporters of color in the City Hall press corps. While there are women of color who sometimes cover my administration, there are zero women of color assigned to the City Hall beat. Zero. I find this unacceptable and I hope you do too.”

“I am issuing a challenge to you,” penned the mayor. “Hire reporters of color — and especially women of color — to cover Chicago politics and City Hall in particular.”

The National Association of Black Journalists wrote a statement sharing that while they don’t support Lightfoot’s decision to exclude white journalists from her anniversary one-on-one interviews, they “applaud the mayor’s sensitivity to the lack of diversity among the people who cover city government.”

“Historically, America’s elite political units have been led by predominantly white reporters and managers,” NABJ officials said. “Too often Black journalists are not given the opportunity to join political teams.”

Like Lightfoot, the NABJ also issued a call to action: “We call on all media outlets to further improve Black and Brown representation within their newsrooms now. There should be no further delay in making swift and effective changes. ”

As expected, the controversial decision was immediately branded as racist by many commenters. One detractor called Lightfoot “The Democrat version of Donald Trump.”

Gregory Pratt, a Latino journalist with The Chicago Tribune, made it clear his outlet would not be following the mayor’s request. “Politicians don’t get to choose who covers them,” he tweeted.

One supportive person posted: “What people don’t realize is that this is a step forward. If a black person asks a question then the black community is represented. This follows from the fact that people of the same color feel the same way and have the same beliefs. That’s representation!”