Opinion: White domestic terrorism remains our greatest threat, yet white America lives in denial about the history of Black Wall Street, a history of genocide and racialized trauma. 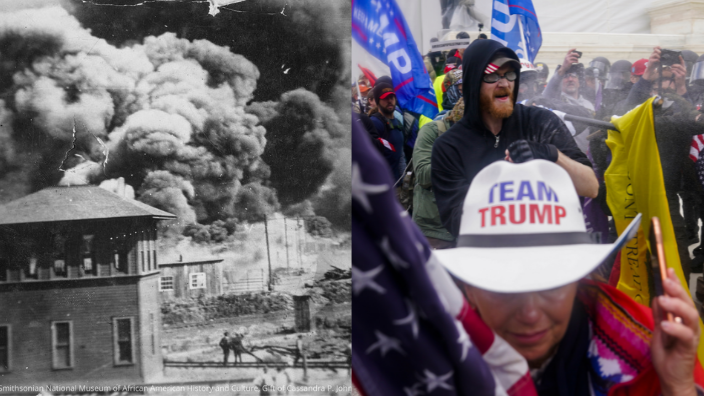 A full century after the Tulsa Race Massacre, justice remains elusive for the victims of Greenwood and all Black victims of racial violence and systemic racism. This is because the white lynch mob never went home and they never disbanded.

White domestic terrorism remains our greatest threat, yet white America lives in denial about the history of Black Wall Street, a history of genocide and racialized trauma, and wants to pretend it never happened.

On May 31, 1921, evil descended upon the prosperous and thriving Black community when, following a false rumor that a Black man had assaulted a white woman in an elevator, a white mob murdered hundreds of residents and an aerial bombing destroyed 35 square blocks of 1,200 homes and the business district. And at least 4,000 Black Greenwood residents were arrested and placed in internment camps by the Oklahoma National Guard.

Read More: ‘Tulsa: The Fire and the Forgotten’ pays respect to lives lost

Decades before the 1985 MOVE bombing in Philadelphia, the Tulsa massacre was the first bombing of American citizens by government agents. This mass atrocity came during a time of revival for the Ku Klux Klan, when white mob violence was taking place across the country, these so-called “race riots” were acts of white supremacist domestic terror designed to instill fear in Black folks and keep them in their place.

The Tulsa white community acted in earnest to erase the memory of the massacre, even removing it from the newspaper records. No one talked about what happened in 1921, and children never learned about it in school. The recent testimony that Tulsa survivors Mother Viola Fletcher and Hughes Van Ellis recently gave before Congress is a reminder that neither Oklahoma nor America has done right by these victims.

“For 70 years, the City of Tulsa, and then its Chamber of Commerces told us that the massacre didn’t happen,” said Fletcher, who is 107. “Like we didn’t see it with our own eyes.”

“The courts in Oklahoma wouldn’t hear us. The federal courts said we were too late,” said Van Ellis, referring to courts finding the city of Tulsa was not liable for the massacre, and federal courts up to the U.S. Supreme Court refusing to hear a case for reparations. “We were shown that in the United States that not all men were equal under the law.”

As memories of Black Wall Street were buried and kept secret for years, the bodies of the victims were buried in mass gravesites. Remains discovered last year in unmarked coffins will be exhumed on June 1. And still, many families living in fear for years never learned of what happened to their loved ones, what became of their remains.

Damage from the white mob was estimated at $200 million in today’s currency. But the damage was far greater. “In addition to killing the victim, often a secondary objective was the externality a lynching produced — to intimidate the victim’s family, community, or ethnic or racial group,” said Michigan State University economist Lisa Cook. “A lynching signaled that personal security — and with it the freedom to work and innovate — was not guaranteed.”

Today, the pain of Black Wall Street still lives on, as America lives in denial of the past and white America would move to erase that past. Even as white nationalist lawmakers oppose the removal of Confederate statues –and Hitler statues — because that is history, they don’t want to teach about slavery and racism, because that’s history, too, just the kind that white people don’t want to hear about.

Read More: After trying to remove a confederate statue in Alabama, this activist received death threats

On the eve of the centennial of the Greenwood massacre, the 1921 Tulsa Race Massacre Centennial Commission removed Oklahoma Gov. Kevin Stitt as a member after he signed a law banning the teaching of race, racism and Critical Race Theory in public schools. Specifically, the new law will prohibit required courses that cause anyone to “feel discomfort, guilt, anguish or any other form of psychological distress” because of their race or gender.

This denial of a history of racial violence has real world consequences we are experiencing today. America needs to heal. But healing means acknowledging the atrocities and repairing the damage to Black folks.

We are reliving the past with a vengeance because America refuses to grapple with its past. America placated the Confederates, and they returned as the Klan and segregationists, as lynch mobs that massacred Black people and destroyed their communities in Greenwood, Rosewood and so many other places.

White America chose to forget about Black Wall Street. And because America would not come to terms with systemic racism and white supremacy, the white mobs returned on January 6 for the Capitol insurrection — and not just to lynch Black people. They also returned as fascists and white nationalists in Congress.

One hundred years after the Tulsa Race Massacre, we are reminded that “History never repeats itself, but it does often rhyme.” They will tell Black people to get over it, but we simply cannot do this. The ancestors still resting in unmarked graveyards will not allow us.