Documents show that Queen Elizabeth II has been exempt from racial discrimination laws in the U.K.

Buckingham Palace is under fresh new scrutiny over its commitment to diversity after documents revealed that aides to Queen Elizabeth banned minorities from holding positions of power. It also showed that the Queen has been exempt from discrimination laws for more than four decades.

The Guardian published a report Wednesday in which unearthed documents showed that there was a ban preventing minorities from working in the royal households, a practice that seemingly continued until the 1960s.

In 1968, the Queen’s chief financial manager Lord Tryon informed civil servants that “it was not, in fact, the practice to appoint coloured immigrants or foreigners.”

Furthermore, Lord Tyron believed that minorities were only suited to be servants. In 1968, Home Office civil servant TG Weiler claimed that Tyron and the palace were prepared to comply with new U.K. discrimination laws. However, they still wanted exemptions made on the palace’s behalf so that those with complaints working in her employ would not be permitted to come forward with their claims.

“They were particularly concerned,” Weiler wrote, “that if the proposed legislation applied to the Queen’s household, it would for the first time make it legally possible to criticise the household. Many people do so already, but this has to be accepted and is on a different footing from a statutory provision.”

By March of 1968, the Palace had agreed to comply because “her advisers were satisfied it could not be enforced against her in the courts.”

As such, the Queen was not subject to the 1970 Equal Pay Act, the 1975 Sex Discrimination Act, and the 1976 Race Relations Act in the country. This exemption was extended to the 2010 Equality Act that replaced the three other provisions against discrimination.

Tryon’s beliefs were part of a discovery made from the National Archives as The Guardian is investigating the British Royal’s Family use of the Queen’s Consent—a parliamentary procedure—that allows the monarch discretion at influencing British laws.

A spokesperson for Buckingham Palace released a statement to The Guardian in response to the findings. However, the outlet noted that redress did not specify if the Queen still enjoyed exemption for laws that prohibit discrimination.

“The royal household and the sovereign comply with the provisions of the Equality Act, in principle and in practice. This is reflected in the diversity, inclusion and dignity at work policies, procedures and practices within the royal household,” the statement read.

“Any complaints that might be raised under the act follow a formal process that provides a means of hearing and remedying any complaint.”

The discovery of these papers come three months since Prince Harry and Meghan Markle, the Duke and Duchess of Sussex, gave a sit-down interview with Oprah Winfrey about their decision to step down as senior royals of The Firm. The Duchess, who is biracial, stated that an unnamed member of the Royal Family wondered how dark her son Archie’s skin color would be. 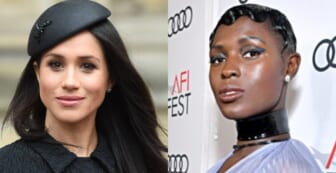