Per a recent report, the openly gay rapper is being honored on a three-story high Philadelphia mural as a ‘Pride Icon.’ 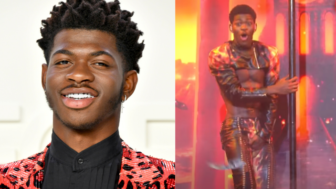 Lil Nas X has become much more than a one-hit wonder. The rapper’s latest single “Montero (Call Me By Your Name)” took the world by storm, becoming a number one hit single on the Billboard Hot 100 leading to a headline-making Saturday Night Live performance.

The music video, which caused some controversy, featured heavy LGBTQ+ themes. The rapper shared on social media that the song release was an important moment for him and his journey to self-acceptance. Now, he’s being honored as an important member of the LGBTQ+ community.

Variety reports that the three-story high mural depicts several of the characters the rapper plays in the video for “Montero (Call Me By Your Name).” The mural is on the wall of the Writer’s Block Rehab bar in Philadelphia (on the 1300 block of Cypress Street in an area of the city known as the Gayborhood.

It was reportedly created by Ash Ryan, a South Philadelphia muralist, and “was commissioned by the bar’s owner, Ram Krishnan.”

In an exclusive interview with Variety, Ryan opened up about the mural, Lil Nas X, and the history of the block.

Ryan shared, “Three years back, we painted a mural on one side of the bar featuring Alain Locke, the great Harlem Renaissance leader, who also happened to be queer…one hundred years after Locke’s time, I wanted another mural of someone who had made an equal name for himself in Black gay culture — someone who meant something to our community.”

Ryan continued to speak to Lil Nas X and how important he has been for Black and queer culture. Ryan explained, “As we looked at characters in today’s media with similar import, Lil Nas X revealed himself as that artist, one who is living his best self, was also an innovator, and an artist who best represented Black culture and queer culture. Besides, I love that video, as it tells a story of both gay culture and that of People of Culture.”

Ryan shared the mural on Instagram and thanked everyone who helped turn the dream into a reality.

In the caption, Ryan wrote: “This is my 36 ft mural of @lilnasx for the Gayborhood in Philly! Thank you so much to Ram @writersblockrehab for letting me paint your wall, I’m proud of how this came out. Thank you for everyone that contributed and supported the making of this mural. Thank you @streetsdeptand thank you @take_it_to_the_max for the drone shots.”

Check out the sprawling mural below: