"I’ve been here for so long, so to be a mentor for them has meant everything to me," Biles said.

Simone Biles broke records on Sunday when she became the only woman ever to bag seven U.S. titles.

As theGRIO previously reported, the 24-year-old will be heading to the Olympics with her seventh national title, which she won on Sunday at the 2021 U.S. Gymnastics Championships. The 2021 individual all-around gold medalist shared a sweet moment with one of her younger teammates during the event. In a short viral clip shared on Twitter, Biles is seen tying a silver ribbon in gymnast Zoe Miller’s hair.

In an interview on Sunday, Biles said she enjoys being a mentor on the squad.

“It’s meant the world, especially having the younger ones to kind of guide through the way,” Biles said. “I’ve been here for so long, so to be a mentor for them has meant everything to me, and to share these accomplishments and these goals.” 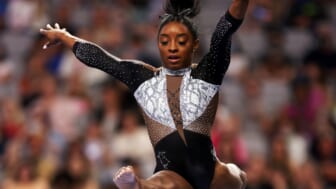 Biles is expected to compete at the Tokyo Olympics this summer. After the close of the event in August, she will embark on the 35-city Athleta Presents Gold Over America Tour, which kicks off in September. The all-star line-up of gymnasts also includes Laurie Hernandez, Katelyn Ohashi, Peng Peng Lee, Danusia Francis, and Morgan Hurd.

The tour is described as “a high-energy, gymnastics-meets-pop-concert spectacular with a soundtrack from today’s biggest hitmakers.”

Biles said the upcoming event will be something that audiences have “never seen before.”

“I love the sport of gymnastics and want to help create a show that captures the pure joy of performing,” said Biles. “Athleta Presents Gold Over America Tour will match athleticism and entertainment, all while celebrating the gold inside each of us!” 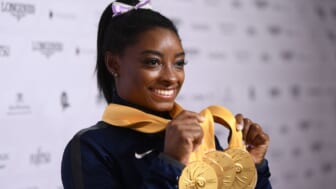 The celebrated athlete did not perform the Yurchenko double pike during the competition on Sunday. As theGrio previously reported, the five-time Olympic medalist made history almost two weeks ago when she participated in the U.S. Classic in Indianapolis and performed the gymnastic vault never before landed by a woman in competition.

Speaking to PEOPLE about pulling off the Yurchenko double pike, Biles admitted that while she still gets nervous, she “felt a hundred percent confident in myself that I could do it safely and land it.”

“[I knew] it was going to be fine because in training I had done it so many times,” she continued. “I do it every other day. And for the last couple of months, shoot, I would say like four months we’ve done on competition surface. So I felt pretty confident.”