The doc on the Harlem rapper premiered at Tribeca Film Festival, exploring his month-long incarceration in a Swedish jail, and his life story

That description also applies to Rocky, a Harlem-bred MC who sets trends in hip-hop rather than follow them extending that to incorporate music, performance and fashion.

And like Rodman, Rocky faced criticism for what he appeared to be on the surface by those who didn’t know the whole story. 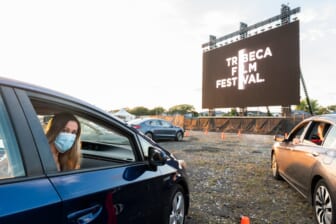 Stockholm Syndrome, which made its debut at the Tribeca Film Festival this week, not only details Rocky’s month-long 2019 incarceration in Sweden, but allows a glimpse inside what makes this young rapper tick, how his family supported and guided him to success, and how his complex relationship with the Black community changed his perspective on Black Lives Matter.

Like an expertly stylized music video, Stockholm Syndrome starts with Rocky, 32, born Rakim Mayers, opening up to viewers. We get a glimpse of his early beginnings in Harlem and the Bronx, New York that started with a difficult childhood, his come-up as a young, enterprising MC, leading to his eventual chart-topping success as both a rapper thanks to platinum-selling songs like “F—– Problems,” and “Wild For the Night.”

It also shows him as a unique fashion influencer, making it cool for guys in the hood to wear babushkas and fingernail art.

But everything came to a full stop when he was arrested in Sweden in 2019 while on tour after two men accused him and his entourage of assaulting them.

The film’s directors, The Architects, do an expert job at putting the assault in proper perspective by showing the majority of the phone camera footage of Rocky attempting to make peace with the two accusers before any assault takes place.

It’s important for the audience to know from the start that Rocky, his bodyguards Bladimir Corniel and David Rispers, acted in self-defense. This way, the viewer can fully digest the injustice they have to endure throughout the process.

Through the lens of commentators like Naomi Campbell and Rocky’s manager, his mother and Kim Kardashian, who advocated for the White House to assist in his release, show how much race still affects Black men in the justice system all over the world.

Stockholm Syndrome gives the viewer a crash course on the Swedish legal system which includes the lack of bail, no restriction on search and seizure without a warrant, and no formal arraignment before a judge.

Rocky and two members of his entourage were detained and sent straight to solitary confinement on assault charges.

Thanks to some detailed claymation production fused with a voice-over from Rocky, we get a look inside his mind as he recalls the hopelessness he felt while being detained.

“I didn’t know what the f— was going on. Just waking up everyday like this shit is an ongoing nightmare,” Rocky said of his 23-hour lockdown in a Swedish jail.

“It’s pretty lonely. It’s almost like being trapped in your own thoughts, ’cause that’s all you have to reflect on, you know?”

What the film shows Rocky reflecting on are the luxuries in his life that he took for granted and the plight of other prisoners in the detention center who endured the same conditions with worse outcomes.

But what was most poignant was how much Rocky holds the memory of three men in his life most responsible for his success and ambition – his father, his brother Ricky and his groupmate A$AP Yams.

All three have died, and it is obvious how much their respective deaths still weigh heavy on him, as all of them played key roles in building Rocky’s confidence as a recording artist and striving to be better.

He spoke candidly about how encouraging his father was, and how much making him proud before his death meant to him. Rocky talks about how looking up to his gang member older brother Ricky led him to become a Blood at the age of 10.

But before he was shot dead, Ricky forced Rocky out of the gang life and told him to focus on his music.

One of the best parts of Stockholm Syndrome is showing the duality of how social media responded to Rocky’s incarceration throughout the process. At first, there is a flood of supportive tweets from celebrities like his friend Tyler the Creator, who pressed for his release.

Then Black Twitter weighed in on how Rocky deserved to go through the ordeal as a comeuppance from his cavalier comments about the Black Lives Matter movement and his opinions on the protests in Ferguson, Missouri after the police shooting of Michael Brown.

“I’m not about to say that I was down there throwing rocks at motherf—–s, getting pepper-sprayed. I’d be lying. Is it because I’m black? What the f—, am I Al Sharpton now?” Rocky told a Time Out reporter in a 2015 interview.

“I’m A$AP Rocky. I did not sign up to be no political activist,” he said then, adding, “I live in f—- Soho and Beverly Hills. I can’t relate. I go back to Harlem, it’s not the same. It’s a sad story. I gotta tell you the truth.”

He later told YouTuber Kerwin Frost, he just didn’t feel it was his place to comment as he, unlike, say rapper J. Cole had offered nothing in the way of direct action.

In the doc, instead of apologizing or backtracking from those comments, Rocky just admits he was wrong.

Stockholm Syndrome is neither an A$AP Rocky pity party nor a vanity project. It is a poignant look at an artist who is aware of his influence and ability, while evolving into a man of principle and compassion.

The film can be best summed up in Rocky’s own words.

“The reason I don’t push my story down people’s throat is because the story that I’m telling you right now, everybody has this story were I come from. They got worse stories,” Rocky said.

“We’re in the day and age in hip hop where it’s cool to kind of flaunt your struggle to the point where some people make it up. For me, it’s just, like, I know what I been through. That s— really happened, you know what I’m saying? I just try to give a different perspective of the same story.”

Stockholm Syndrome premiered at Tribeca Film Festival and online streaming options sold out. No word yet on a larger release for the film.