Next week marks the official return of the Tribeca Film Festival, and if the list of films is any indication, fans have plenty to look forward to this year. 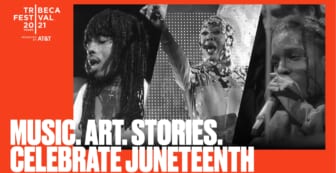 As theGrio has previously reported, the Tribeca Film Festival is returning for its 20th anniversary with in-person screenings and live events. The highly anticipated 12-day event will host numerous screenings at venues in Manhattan, Staten Island and Brooklyn.

The festival this year also boasts some major star power and exciting new voices in its lineup.

Check out the must-see films and their official synopses from the festival below:

A look into the lies and myths of the Confederacy.

“Harrowing, smart, and bitterly funny, Hunt’s documentary The Neutral Ground confronts the Lost Cause—the Southern campaign that mythified the Confederacy—with refreshing clarity. With New Orleans as the main backdrop of the story, the film expands its scope to the country at large, bringing to light the fabricated histories born out of the Civil War and the hard truths much of America has yet to face about slavery. Throughout, Hunt’s radical openness leads to staggering, often personal conversations with advocates and opponents of Confederate monuments alike.”

Being Bebe (Directed by Emily Branham)

“How does one embrace a career as a proud LGBTQ performer in the US, while anticipating the disapproval of conservative Cameroon, where being gay is an imprisonable offense? And how do you live up to being one of West Africa’s biggest success stories, while simultaneously being underestimated and discriminated against in the American entertainment industry?

With all eyes on him, Marshall does what only he can, navigating the complexities of race, gender and sexuality with poise, persistence and purpose. Sharing 15 years of unfettered access to Marshall’s story, filmmaker Emily Branham presents his unique love affair with performance alongside his unstoppable pursuit of Queer Black Excellence, offering an unprecedented portrait of an artist who chooses to live a creative life against all odds.”

This documentary sheds light on Ferguson, Missouri, letting audiences into the real life stories of its citizens, and their hopes for the future.

“Through interviews from community members, including Dorian Johnson, who was with him that day, and Michael Brown’s father, this documentary illuminates the stories from within the city since that time, including the dreams and desires of its citizens to move beyond the limited and all-too-common narratives of racism and division in the media. The film reveals the humanity within the people of Ferguson, who represent all of us, and the communities in which we live.”

Asking For It (Directed by Eamon O’Rourke)

Stockholm Syndrome (Directed by The Architects)

Music lovers and fans of A$AP Rocky should enjoy this look at a sobering incident in the rapper’s life.

“Harlem-bred Rakim Mayers rode a rocket to stardom as multi-platinum rapper A$AP Rocky, on the strength of his energetic performances, cutting edge fashion, and irreverent attitude. All of this came crashing to a halt in 2019 when he was thrown in a Stockholm prison following a violent altercation with a pair of local provocateurs. Stockholm Syndrome chronicles the meteoric rise of this contemporary trendsetter, capturing the exuberance of youth and urgency of hip-hop in equal parts, before taking a detour into darkness.”

The One and Only Dick Gregory (Directed by Andre Gaines)

This documentary shines a new light on an American icon.

“Dick Gregory was an icon for Black America. A comedian who used his considerable public platform for activism during the civil rights movement of the 60s, he was the rare entertainer who felt almost as at home on the couch of The Tonight Show as he did on the front lines of the fight for racial equity and justice. Comprised of stunning archival footage and contemporary interviews, Andre Gaines’ brilliant debut feature takes a close look at Gregory’s legacy, documenting his many personal reinventions throughout the decades, while hearing from the countless entertainers (Dave Chappelle & Chris Rock among them) who have been inspired by his blueprint. The film solidly tackles its mission to expose the work of this genius to a new generation, providing a caring and thrilling portrait of Black excellence against all odds.”

“While the country was embroiled in a divisive election with racial tensions flaring, civil rights activist and trailblazing performer Harry Belafonte guest hosted The Tonight Show for one week in 1968. By then, Johnny Carson had turned this pioneering late night show into one of the most powerful platforms of communication. In an unprecedented move, Belafonte took a predominantly white institution, The Tonight Show, and transformed it into a multicultural and political experience.

Award-winning director Yoruba Richen examines the importance of this lost broadcast history through vibrant interviews with Belafonte, Whoopi Goldberg, Questlove, and guests who appeared that week including Petula Clark, Dionne Warwick, and Freda Payne. The Sit In features rare archival footage, including interviews with Dr. Martin Luther King Jr. and Robert F. Kennedy, which are among the last television appearances before both were assassinated.”

“On August 23, 1989, a young Black man, Yusuf Hawkins, went with friends to view a used car in Bensonhurst, Brooklyn. After being misidentified as the boyfriend of a local white girl, Hawkins is attacked by an angry mob and murdered. His death sparks outrage, bringing simmering racial tensions to a boil. The aftermath of Hawkins’s death swells to a social movement and engulfs the mayoral election as Hawkins’s family demands justice. When the 12 youths associated with Hawkins’s death are mostly set free, routine marches in Brooklyn threaten to tear communities apart in the name of redemption. Director Muta Ali’s feature debut exposes New York City’s raw underbelly of prejudice. Featuring Spike Lee, Jesse Jackson, and David Dinkins, Ali probes the problematic portrayal of black victims in the media and how the racial divide of Americans is deeply entrenched in our national psyche.”

Bitchin: The Sound and Fury of Rick James (Directed by Sacha Jenkins)

A deep dive into the history and legacy of R&B icon Rick James.

“In this definitive portrait, acclaimed filmmaker Sacha Jenkins examines the brain beneath the braids, charting his soaring artistic success and eventual personal decline. Sexuality, race, and the tumultuous stew of American culture all contributed to the transformation of the songwriter born as James Ambrose Johnson into the larger-than-life performer forever known as Rick James. Against a soundtrack that compels you to get out of your seat from the opening moments, Jenkins approaches his subject not with reverence, but instead with indisputable care as he delves into the circumstances that birthed this one-of-a-kind personality.”

I Promise (Directed by Marc Levin)

The story behind the school basketball superstar LeBron James funded in his hometown of Akron, Ohio.

“I Promise tells the story of LeBron James’ efforts to close the achievement gap in his hometown of Akron, Ohio through the eyes of the inspiring students who are resetting expectations of their futures. The documentary will explore the day-to-day trials, triumphs, and life-changing impact of the school staff, students, and families working together in a unique, family-first educational environment that embraces the trauma and challenges many face in Akron.”

The Outside Story (Directed by Casimir Nozkowski)

“Frustrated, listless, and heartbroken after breaking up with his girlfriend, introverted video editor Charles (Brian Tyree Henry) is struggling to make his deadline. When a food delivery goes awry, Charles experiences every New Yorker’s worst nightmare: getting locked out of their apartment. With no shoes, no wallet, and a phone low on battery power, he runs into a cavalcade of eccentric Brooklynites, including a swinging upstairs neighbor, a strict parking enforcement officer, the kindly widow next door, and a budding piano prodigy. His zany encounters with his neighbors prompt Charles to reevaluate his life and regret the abrupt end of his relationship.”

“As diversified as it is honest, With/In unites an excellent roster of directors and actors to detail COVID’s many domestic challenges in a cinematic time capsule of sorts. Nuanced performances from Julianne Moore, Don Cheadle, Rebecca Hall and more take center-stage while the likes of Sanaa Lathan and Chris Cooper make their directorial debuts. Together, they’ve provided a touchingly optimistic record of one of this generation’s most difficult years, if not the most.”

This feature follows a 13-year-old girl living in a favela in Brazil during the Olympics.

“Tati (Cassia Gil), is a 13-year-old living in a Brazilian favela. Her mother Andrea (Débora Nascimento) wants to escape with Tati but struggles due to her drug addiction. Her family and living situation changes abruptly when Jaca (Bukassa Kabengele), the former leader of the favela, is released from prison and returns. His presence creates tension between the community and the new leaders that have taken his place.The film takes place during the Olympics in Brazil, when the country’s police and government implemented an operation called pacification, aiming to quell violence in the favelas by sending armed police forces to these neighborhoods. What this policy created was a complex layer of violence that was mostly sustained by the criminalization of poverty.”

Black woman and women of color share their unique perspectives.

Another collection of shorts, these, “aim to accelerate gender and racial equality behind the camera by opening doors to the next generation of multicultural women directors through mentorship, production support, and distribution opportunities.”

Through this documentary, audiences can intimately follow Dave Chappelle’s summer of 2020.

“Fueled by the murder of George Floyd, shut-in by the closures of business and unable to perform around the country, the movie follows Chappelle as he provides the community he calls home with two things desperately needed in difficult times – economic and comic relief. What began as an experimental socially-distanced live comedy show in a neighbor’s cornfield, grew into an unforgettable summer with his neighbors, friends and fellow comedians. Ultimately, Chappelle’s cornfield concerts would serve as a model of courage not just for his community, but for the entire live entertainment industry.”

For more on the Tribeca Film Festival, information on all in-person events and personal screenings, head to their official website, here.