An upcoming book from Wall Street Journal reporter Mike Bender alleges former President Donald Trump blamed his son-in-law for the civil unrest that erupted in the country following the death of George Floyd. 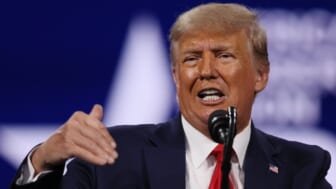 The book titled “Frankly, We Did Win This Election: The Inside Story of How Trump Lost,” includes firsthand accounts from some of Trump’s closest advisers, “who spoke to me on the condition of deep background, an agreement that meant I could share their stories without direct attribution,” Bender wrote for Politico.

In the book, Bender describes how Trump privately told advisers that he didn’t push back hard enough against protesters in the wake of Floyd’s killing by Minneapolis police in May 2020.

He also lamented that “the Blacks” hated him and would never vote for him despite his signing of the criminal justice reform bill, Mediaite reports.

“For Father’s Day in 2020, what Donald Trump mostly wanted was to avoid his son-in-law. It was Jared Kushner who had talked the president into hiring Brad Parscale to run a campaign that was now, just months before the election, in freefall.

And when most Americans rejected Trump’s unreasonably truculent response to the civil unrest that was sweeping the country, the president also blamed Kushner…Trump privately told advisers that he wished he’d been quicker to support police and more aggressive in his pushback against protesters.

“Trump had staked nearly his entire campaign in 2016 around a law-and-order image, and now groaned that the criminal justice reform that Kushner had persuaded him to support made him look weak and — even worse — hadn’t earned him any goodwill among Black voters.

“‘I’ve done all this stuff for the Blacks — it’s always Jared telling me to do this,’ Trump said to one confidante on Father’s Day. ‘And they all f—— hate me, and none of them are going to vote for me,’” the excerpt said.

According to Bender, then-President Trump was reportedly told by a Black Secret Service agent that it would be “very offensive” for him to hold a planned rally in Tulsa, Oklahoma, on Juneteenth.

Trump ultimately made the decision to push back the date for the rally in 2020. It was Parscale who first recommended holding the event on June 19 in Tulsa.

The date, June 19, 1865, is when enslaved people in Galveston, Texas were finally informed of the Emancipation Proclamation two and a half years after former President Abraham Lincoln signed it in 1863.

Tulsa is also historically significant due to the 1921 Race Massacre.

Bender noted that no one on Trump’s team had concerns over the date – or the “combination of time and place – as potentially problematic.”

“Had Parscale bothered to ask Katrina Pierson, the highest-ranking Black staffer on the campaign and a close friend of Parscale’s, she would have told him that June 19 was Juneteenth, a significant holiday for Black Americans that commemorated the end of slavery,” Bender wrote.

“She also would have said to him that Tulsa, as most Black Americans are well aware, had been home to one of the bloodiest outbreaks of racial violence in the nation’s history.”

When Republican National Committee (RNC) chairperson Ronna McDaniel heard about the plans, she warned Parscale “Don’t do this,” according to Bender.

“The media is not going to give us the benefit of the doubt, especially now,” McDaniel reportedly said.

Parscale pushed on with the June 19 rally anyway, sparking outrage among Democrats.

Trump was reportedly surprised by the backlash and asked staffers if they knew what Juneteenth was. Days after announcing his visit to Tulsa, the former president allegedly asked a Black Secret Service agent about the day.

“I know what it is. And it’s very offensive to me that you’re having this rally on Juneteenth,” the Secret Service agent told Trump, according to Bender.

Trump then decided the rally would instead take place the day after Juneteenth, on June 20. He later claimed nobody had ever heard of Juneteenth until the controversy surrounding his Tulsa event.

“I made Juneteenth very famous,” he said.

Bender’s “Frankly, We Did Win This Election: The Inside Story of How Trump Lost,” will be published on August 10.