“It no longer represents ALL of us. It’s not fair to be forced to honor it. It’s time for a new flag,” Gray wrote

Macy Gray is calling for the American flag to get a face lift.

Just in time for Juneteenth, Gray wrote an opinion piece for Market Watch explaining why the American flag needs to be updated. The singer said in light of the national holiday, America needs a flag that will represent us all.

“The Confederate battle flag, which was crafted as a symbol of opposition to the abolishment of slavery, is just recently tired. We don’t see it much anymore. However, on the 6th, when the stormers rained on the nation’s most precious hut, waving Old Glory — the memo was received: the American flag is its replacement,” said Gray, 53, at the opening of the piece. 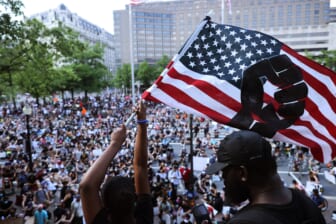 As reported by theGrio, Juneteenth originated in Galveston, Texas where more than 200,000 enslaved Black people were told two years after the Emancipation Proclamation was issued that they were free. That was months before the 13th amendment was in place to officially eradicate slavery.

On Thursday, President Joe Biden signed Juneteenth into law as a federal holiday.

Gray said that the flag is also missing stars, which are supposed to represent all of the states within the United States.

“It no longer represents ALL of us. It’s not fair to be forced to honor it. It’s time for a new flag,” she wrote.

“There are 50, where there should be 52. D.C. and Puerto Rico have been lobbying for statehood for decades. Both have been denied since statehood would allow each territory’s elected officials seats in the house.”

Robert G. Heft is credited with making the current fifty-star flag at just 17-years-old. It was adopted in 1960 and is also the longest-used version, per Ohio History Central.

In the piece Gray also added that the colors on the flag should reflect the skin tones of the nation. 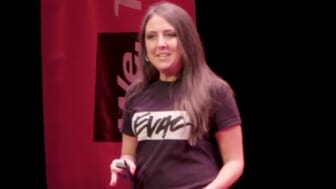 “What if the stripes were OFF-white? What if there were 52 stars to include D.C. and Puerto Rico? What if the stars were the colors of ALL of us — your skin tone and mine — like the melanin scale? The blue square represents vigilance and perseverance; and the red stripes stand for valor. America is all of those things. So, what if those elements on the flag remained? What if the flag looked like this?”

Gray is known for speaking up for what she believes in and her activism.

Back in 2020 she stopped by theGrio to discuss her non-profit organization, My Good, its goal is to help aid the families of police brutality.

“My Good is a new charity, and what we do is we support the families of victims of police killings,” Gray explained at the time. “A lot people, you know, you hear about police shootings, but people forget about what the families go through after–the grief and, you know, mental health issues, huge financial burdens. So we’re there for particularly those families.”