A month after his passing, celebrities like Steve Harvey and Chris Tucker all gathered this week to celebrate the life and influence of Paul Mooney.

According to TMZ, Wednesday, the prolific comedian was memorialized during a service at The Hollywood Roosevelt that included a mixture of recorded messages and in-person appearances by Hollywood elites such as Jay Leno, Eddie Griffin, Debbie Allen, Chris Tucker, Lunelle, Steve Harvey and Robert Townsend. 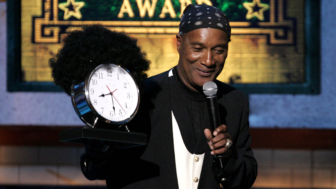 The space was beautifully decorated with flowers and pictures of Mooney and Townsend in particular became overwhelmed with emotion during the gathering.

“There’s many stars in Hollywood, but there’s only one moon,” shared the director, “… and there was truly only one moon.”

As theGrio previously reported, this is just the latest memorial for the comedy legend who was also celebrated earlier last month during an event hosted by The Laugh Factory in Hollywood.

Prior to the event, Jamie Masada, the club’s owner, announced that comics-actors Eddie Murphy and Kevin Hart had been contacted to appear at the event. Comedienne Tiffany Haddish sent in a video tribute due to a scheduling conflict.

According to the report, Mooney’s twin sons, Dwayne and Daryl — also stand-up comedy veterans –, were among those in attendance.

The event honoring Mooney featured comedy sets from performers, who also shared some of their best stories about the late comedian. He was one of the first comedians to perform at The Laugh Factory when it opened in 1979 and made the venue his second home.

The day after Mooney’s passing, Dave Chappelle, who reintroduced him to younger generations via his now-iconic Chappelle’s Show, vowed to uphold the legacy.

“I want to shout out every comedian on Earth, one of the best that ever did it, paved the way today, his legacy will live forever,” he said of Mooney. “He did everything from Richard Pryor Show to Chappelle’s Show, he’s one of the first Black people ever in the Writer’s Guild. Paul Mooney will be sorely missed and wildly remembered. I’ll see to that.” 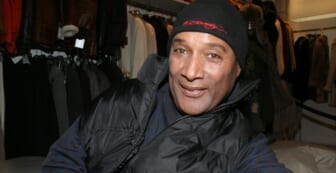 Mooney appeared on Chappelle’s popular 2000s Comedy Central show, where some of his acclaimed sketches were “Ask a Black Dude,” “Mooney at the Movies” and “Negrodamus,” a play on the French astrologer Nostradamus, in which the legendary writer-funnyman-actor answered questions from a uniquely Black perspective.

Mooney passed away the morning of May 19 of a heart attack at the age of 79 in his Oakland, California home.

Veteran news journalist Roland Martin was one of the first to share the news on Twitter, where he also wrote that Mooney had been suffering from dementia.

A tweet from Mooney’s official account confirmed his passing: “Thank you all from the bottom of all of our hearts …you’re all are the best!…… Mooney World… The Godfather of Comedy – ONE MOON MANY STARS! .. To all in love with this great man.. many thanks.”

Tributes to Mooney immediately poured in from celebrities on social media following the announcement.

“Paul Mooney. A comedy giant,” director Ava DuVernay tweeted. “I recall listening to his RACE album in college and how formative it was. Yeah, the jokes. But more so, the freedom. He spoke freely and fearlessly about feelings and experiences others found difficult to express. May he be truly free now. Rest, sir.”