Too hot: Track trials come to a halt as temperatures soar

The U.S. track and field trials came to a halt Sunday afternoon with temperatures reaching 108 degrees (42 Celsius). One athlete, heptathlete Taliyah Brooks, was carted off the field in a wheelchair but was planning on returning in the evening to finish the competition.

Fans were filing into the stadium for the headline races of the final day of Olympic qualifying when, at around 3 p.m., the track announcer came onto the PA system and said action was being suspended due to extreme heat. He asked all spectators to evacuate. 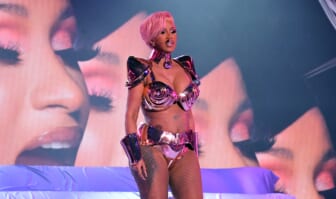 Brooks had been in fourth place after five of the seven heptathlon events; it is considered among the most grueling contests in track and field. She had been listed as a “DNS” — did not start — in the sixth event, the javelin. Hours after she was taken out on a wheelchair, USA Track and Field said she had been granted a request to re-enter the javelin competition, where she would get three throws when the action resumed in the evening. After that, she would join the last event, the 800 meters.

The program was scheduled to resume at 8:30 p.m. PDT. Among those still waiting to secure spots in the Olympics were Noah Lyles in the men’s 200, and Dalilah Muhammad and Sydney McLaughlin, who were set to face off in the women’s 400 hurdles.

Earlier, JuVaughn Harrison won the high jump, contested under cloudless skies in 105-degree temperatures. Harrison was also entered in the long jump, which had been pushed back to the evening. 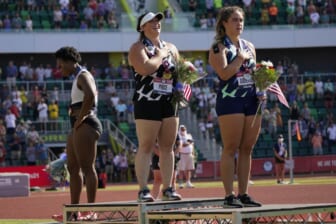 A record heat wave settled in over the Pacific Northwest for the second day, with the temperature in Portland, two hours north on Interstate 5, reaching an all-time record of 110 (43 Celsius).

“It’s crazy. I wasn’t expecting it to be this humid,” he said. “We just had to be mentally locked in, mentally prep ourselves for it, stay hydrated and go out and get the job done.”

The men’s 5,000 took place at 10 a.m. in a nod to the forecast, which since early last week had predicted triple-digits over the weekend. In temperatures reaching 90 degrees on the track, Paul Chelimo fended off a pair of runners for a 0.19-second victory.

“Honestly,” Chelimo said, “I wanted it a bit hotter.”