Congratulations are in order for Master P’s second-youngest son. Hercy Miller, 19, has just signed a $2 million deal after the NCAA changed their official rules. 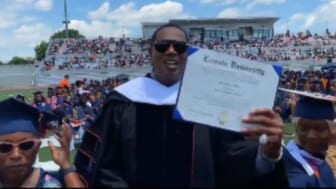 According to TMZ, Hercy Miller, a 6’3 point guard who played high school ball for Minnehaha Academy in Minneapolis, has an exciting future ahead of him. The NCAA recently announced a long-anticipated rule change to allow athletes to make some money off their personal image and likeness. A day after the change, Hercy Miller signed a $2 million dollar deal.

TMZ caught up with Master P Friday and he explained why the deal with a technology company is significant and not just for his son.

He explained, “It was a two million dollar deal. It’s incredible. This is gonna change the way college athletes want to stay in school.”

Master P told TMZ in April that he had the deal lined up and was simply waiting for the NCAA to change their rules.

He said then, “We have a lot of deals on the table, not only for Hercy, but for [son] Mercy. In August, the league is changing, the NCAA. You’ll be able to make money off your likeness, you’ll be able to do marketing deals…so, right now I have a deal on the table for Hercy for $2.5 million. He never even played a lick of [college] basketball.”

Hercy, who will play for historically black college Tennessee State in the fall, told TMZ, “I signed a deal with an American technology company. Like my dad said, it’s a blessing.”

Master P has also been sharing his love for his son on his official Instagram page. In the caption of a post uploaded on Friday morning, he wrote, “My son is the future! He’s an A student with a big heart. He’s all about giving back to the community. He’s a beast on the court because he works hard @hercymiller It’s not how you start, it’s how you finish “Fearless Dreamer” @tennstateu #TheBigBlue#Godisgood 2021-22 basketball season get your tickets NOW #nashville“