“This has been a long journey that started in Harlem,” says Alvin Bragg, who will likely be elected to lead one of the most high-profile prosecution jobs in the U.S.

Alvin Bragg, a former top deputy to New York’s attorney general, was poised to become Manhattan’s first Black district attorney and to take over the investigation of former President Donald Trump after his closest opponent conceded in the Democratic primary.

The candidate trailing him by several thousand votes in the race, former federal prosecutor Tali Farhadian Weinstein, said in a statement Friday that after several days of absentee votes being counted, “it is clear we cannot overcome the vote margin.”

New York City’s Board of Election has not publicly released updates on the count of absentee ballots. As a result, The Associated Press has been unable to call a winner.

“This has been a long journey that started in Harlem,” Bragg said in a statement, referring to the Manhattan neighborhood where he grew up. “And today, that 15-year old boy who was stopped numerous times at gunpoint by the police is the Democratic nominee to be Manhattan District Attorney.”

With a win, Bragg would be virtually guaranteed to succeed District Attorney Cyrus Vance Jr., who has been leading an investigation of Trump and his company and is retiring at the end of the year. 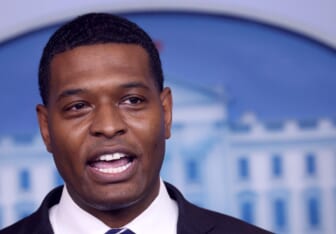 A former federal prosecutor who now teaches at New York Law School, Bragg worked as a civil rights lawyer before entering government service. He currently represents the mother of Eric Garner in a judicial inquiry into his 2014 death after being placed in a police chokehold.

Bragg said he was drawn to a career in law after having a gun pointed at him six times as a youth — three times by police. In one encounter, amid the crack cocaine epidemic of the 1980s, Bragg said an officer stuck a gun in his face and wrongly accused him of being a drug dealer as he walked to get groceries for his father.

Farhadian Weinstein said that while she had disagreements with Bragg, she supported his “commitment to justice.” She also said she heard a “demand for more women in political leadership” while campaigning and hoped others would heed that call.

Manhattan has never had a woman district attorney.

A special grand jury this week indicted the Trump Organization and its chief financial officer, Allen Weisselberg. They were charged with helping Weisselberg and other top executives evade taxes he should have paid on apartments, cars and tuition aid given him by the company. 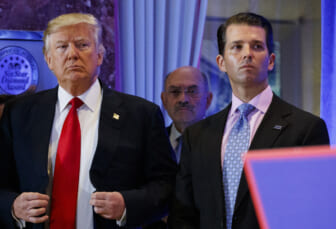 Trump himself was not charged in the case, but the investigation is not over.

Vance, the Democrat who brought the charges, will lead the Trump probe until he leaves office.

All of the Democrats running for the office had said they weren’t afraid of taking on Trump, but they were also cautious not to appear as if they were prejudging the case or making the matter a campaign issue.

Bragg has investigated Trump before as the state’s chief deputy attorney general in 2018. He helped oversee a lawsuit that led to the closure of Trump’s charitable foundation over allegations he used the nonprofit to further his political and business interests.

Prior to that, Bragg led a unit of the state attorney general’s office that investigates killings by police.

Bragg said he’d use data to spot racial disparities in the criminal justice system. In deciding which cases to pursue, Bragg said he’d want prosecutors to ask: “Does this case make us safer.”

Manhattan district attorney is one of the most high-profile prosecution jobs in the U.S., dramatized on TV’s Law and Order and Blue Bloods.

The office has a staff of 500 lawyers and a $125 million annual budget.

A separate forfeiture fund bankrolled by Wall Street settlements and worth more than $800 million is used for grants to criminal justice and community organizations and big initiatives, such as testing backlogged rape kits.

Vance will have been in office for 12 years when he steps side. His successor will be just the fourth elected district attorney in Manhattan in the last 80 years. Frank Hogan served for 31 years. Robert Morgenthau was in office for 34 years, until he was 90.