City Girls’ JT gushes about Beyoncé after meeting at July 4 party: ‘I made it’

JT took to Twitter to break down her heartfelt interaction with the Grammy award-winning singer, in which she gave advice and called the rapper "beautiful"

It seems City Girls‘ JT was in the presence of a queen this weekend. The rapper took to social media to gush about her encounter with Beyoncé at a Fourth of July party, writing, “I made it.”

The Hamptons celebrated Independence Day with quite the star-studded affair.  Lil Uzi Vert, Meek Mill, JAY-Z, and more partied all night under the fireworks at an exclusive all-white party. Also in attendance at the party was JT, who had a run-in with Queen Bey herself, according to her Twitter account. 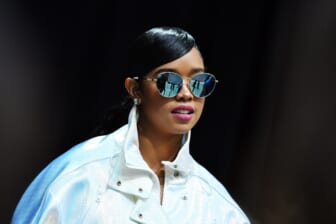 According to her tweets, JT shared specific details of her interactions with the “MOOD 4 EVA” singer, including some advice she gave to the rapper. JT wrote in her tweet, “I love Beyoncé if I didn’t feel like I made it no other day tonight I did! She told me I was beautiful & she’s proud & to keep going! God look At my life….I came from nothing at all.”

JT seemed to attend the party with her boyfriend, fellow rapper Lil Uzi Vert. JT shared a video on her Instagram stories of Lil Uzi tearing it up on the dance floor over the weekend. Over a video of him dancing, she wrote, “Shut that sh– down.”

The couple also attended the 2021 BET Awards together. They hit the red carpet in style and showed off their love for all of the cameras.

JT recently sat down with I-D alongside City Girls member Yung Miami where she opened up about fame and being in the public eye. She said to the publication, “Man, lemme tell you something. Put this in the magazine. At this point, I don’t give a f-ck what nobody think. Dead a–. These people gon’ make up what they gon’ make up anyway. They don’t know me. They damn sure don’t know her. So I don’t care what they think.”

She continued to break down the bad aspects of social media when you’re a celebrity. She continued to tell the publication, “Twitter and the Internet world have got out of control. Period. It’s out of control. People gave the internet an inch, and they done took a motherfucking mile. People doing things for tweets, viral moments, comments. It’s not even genuine hate no more.”

Check out the full interview, here.