“We want your support,” Olympian Gabby Thomas wrote regarding the upcoming Olympics

Olympian Gabby Thomas is speaking out and calling for support for Black athletes gearing up to compete in Tokyo this summer.

“It really hurts to see so many black people choosing not to watch the Olympics this year,” Thomas tweeted on Tuesday.

This comes in response to people saying they would boycott the Tokyo Olympics after sprinter Sha’Carri Richardson was controversially banned from the games due to a positive test for marijuana.

On Tuesday, the official U.S. Olympic Track & Field roster was released, featuring both veterans and first-time Olympians. Thomas was one of the names on the final list, which was notably missing Richardson’s name.

In the roster announcement released by Team USATF, they highlighted Thomas’ background and historic accomplishments.

“Gabby Thomas, a neurobiology major from Harvard who is getting her masters in epidemiology, qualified for the team in the 200m clocking a Trials record and equaled the third-fastest time in history to win in 21.61, taking over the No. 2 spot on the all-time world performer list behind only Florence Griffith-Joyner,” Team USATF shared.

In Thomas’ tweet calling for support, she highlighted how hard Black athletes have to work to make it to the Olympics.

“There are so many black athletes who have put in YEARS of hard work for this moment- myself included,” the Olympian tweeted. “We want your support.”

In addition to calling for support, Thomas went on to share concerns about misplaced anger from fans.

“Additionally, I worry some of the anger and disdain may be misplaced. The “Olympics” and those at the IOC have nothing to do with current events taking place,” Thomas tweeted. 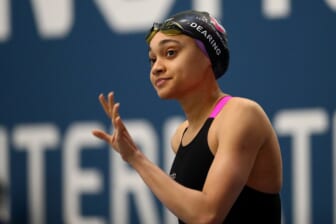 Several people responded saying they plan to still watch the Olympics, leaving responses like, “I’ll still be supporting you and the other black athletes.”

Another person wrote, “Who said we weren’t watching?!? I’m gonna watch hoop & track then largely ignore every other event….like I do every Olympics.”

“I’m watching but don’t worry about who isn’t. Stay focused. The ones who support you matter,” another user shared.

Meanwhile, others doubled down on why they feel Olympians should pull out from the games.

“Bruh, stop running for U.S.A, they do not appreciate our value nor respect us as people and for y’all to complain about us standing our ground like y’all should do, is ridiculous and wonder why things don’t change,” another user wrote.

A few hours after Thomas shared her thoughts on Twitter, Richardson took to the social media platform to also share a message.

“The attention that is on track now and was because of very very few names,” Richardson tweeted. “So if that’s where fans support lay, you can’t be mad at that.”

Several people agreed with Richardson and left comments in solidarity.

“She right. Ppl who don’t watch track (in America) were only gonna watch it for her. Saw hella ppl who never watch track post abt her,” one user wrote, agreeing with Richardson.

Others touched on Black people historically watching track and field events during the Olympics, adding they will continue to watch the games.

“This must be the younger generation bc Black folx BEEN supporting & hyping up track & field…” another user wrote.

The Olympic Games are set to take place from July 23 through August 8, according to Team USATF.