"People used to tell me my hair was 'too big' for the cap - never that the cap was too small for my hair," Alice Dearing wrote.

This comes after a Soul Cap swimming cap worn by 24-year-old Alice Dearing, who recently became the first Black female swimmer to represent Great Britain at the Olympics, was rejected by FINA, according to The Times.

Dearing recently spoke about the decision on Sky Sports News, saying, “The issue with this story is I don’t want little Black girls and little Black boys to look at elite swimming and think it is not open to them because that is completely the wrong idea. It is open to them, I really hope that with it being under review that some agreement will come about, I’m sure it will.”

She continued, “I don’t want people to look at elite level swimming and think: ‘It’s not open for me, I can’t wear my hair the way I want to and I’ll go and find another sport’, because that’s not what we want. Change is happening at least, Soul Cap has been made and even something as simple as that wasn’t around when I started out swimming.”

FINA ruled that the caps, created by Black-owned Soul Cap, did not fit “the natural form of the head” and to their “best knowledge the athletes competing at the international events never used, neither require … caps of such size and configuration,” The Times reported.

Further diving into the issue on Sky Sports News, Dearing explained that her mother use to relax and braid her so that it would fit into traditional swim caps and makes their “lives easier.”

“It’s only when I’ve got older that I could find ways to manage it in its natural form,” she shared. “The issue of Black people in swimming is a heavy topic so I’m happy to be the person to speak about it because I want to make people aware that these stereotypes aren’t acceptable and Black people should feel comfortable at swimming pools.”

“They shouldn’t feel subjugated or discriminated against in any way, so if I can help in any way to make that better and leave the sport one day where I can look back on it and see the difference I’ve made then that’s what I want to do.”

Groups like UK’s Black Swimming Association, which Dearing cofounded, are standing in solidarity and speaking out against the move.

“We believe this statement made by FINA confirms what we already know: the lack of diversity in elite swimming and in the higher positions in global aquatics, and the lack of urgency for change,” Black Swimming Association shared on social media. 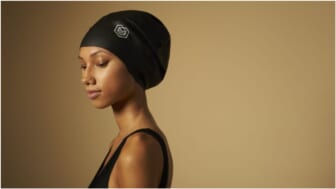 Soul Cap founders Michael Chapman and Toks Ahmed took to social media on June 30 to address concerns around FINA’S decision in a statement released on Instagram.

“We hoped to further our work for diversity in swimming by having our swim caps certified for competition, so swimmers at any level don’t have to choose between the sport they love and their hair,” they shared on Instagram.

“For younger swimmers, feeling included and seeing yourself in a sport at a young age is crucial. FINA’s recent dismissal could discourage many younger athletes from pursuing the sport as they progress through local, county and national competitive swimming,” they continued.

They called for change to happen across the board.

“We feel there’s always room for improvement, but there’s only so much grassroots and small brands can do – we need the top to be receptive to positive change,” Soul Cap shared. “A huge thanks to all who have supported us and our work so far. We don’t see this as a set back, but a chance to open up a dialogue to make a bigger difference.”

FINA released the following statement in response to the criticism over their decision:

“FINA acknowledges the comments and reactions concerning the use of ‘Soul Cap’ swim caps in FINA competition. FINA is committed to ensuring that all aquatics athletes have access to appropriate swimwear for competition where this swimwear does not confer a competitive advantage.

FINA is currently reviewing the situation with regards to ‘Soul Cap’ and similar products, understanding the importance of inclusivity and representation. There is no restriction on ‘Soul Cap’ swim caps for recreational and teaching purposes.

FINA appreciates the efforts of ‘Soul Cap’ and other suppliers to ensure everyone has the chance to enjoy the water. FINA will also speak with the manufacturer of the ‘Soul Cap’ about utilizing their products through the FINA Development Centres.

FINA expects to make its consideration of ‘Soul Cap’ and similar products part of wider initiatives aimed at ensuring there are no barriers to participation in swimming, which is both a sport and a vital life skill.”