EXCLUSIVE: "After doing a lot of self-work for the last few years, I know I'm enough just as I am," social media star Tabitha Brown tells theGrio

Tabitha Brown is living in a state of gratitude.

The social media superstar, 42, has gone from trial to triumph over the past few years, gaining over 3.7 million Instagram followers and 4.8 million TikTok followers thanks to her uplifting and entertaining cooking videos. Now, she’s expanded her empire with a new, all-purpose McCormick seasoning, aptly named Sunshine Seasoning.

“It’s so funny because I have been using McCormick for a very long time. I grew up on it — my parents, my grandparents used McCormick,” Brown said during an exclusive interview with theGrio on Wednesday. “People know my love of garlic powder and [sic] seasonings as I cook, because vegan food can be boring, okay? I’m also really big on salt-free … And of course, who don’t need a little sunshine in their life?”

She continued, “After being shut down for a year and a half in COVID, I felt like when we cook, if we could make something that feels a little tropical and sunny, it would be like having a vacation within yourself — even though you ain’t able to go anywhere. That was really the thought process and, of course, making it salt-free. Because high blood pressure and diabetes, cholesterol, those type of things are in the family and a lot of salt is just not good.” 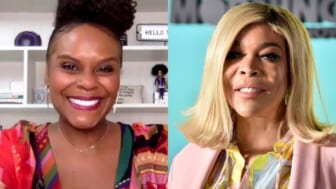 Also Read:
Tabitha Brown claps back at Wendy Williams for comments on retiring her husband

The seasoning, which includes garlic, allspice, thyme, turmeric, cayenne pepper, mango and pineapple, can be used to flavor any dish, according to Brown, but she particularly enjoys using it for “Sunshine burgers, jackfruit, tacos, chili and mushrooms.” The vegan personality revealed that, within minutes of its release on Thursday, Sunshine Seasoning sold out, although plans have been made to restock.

A sold-out brand might be enough for some, but Tabitha Brown’s success doesn’t end there.

Her new ventures have also put her into a position to retire her husband, Chance Brown, from the Los Angeles Police Department after 15 years. The couple, who have been together for 23 years and share two children, celebrated the momentous occasion with a party in Los Angeles, attended by guests, such as motivational speaker Eric Thomas.

“Oh, honey, it’s such a blessing. God is so good,” Tabitha said about the festivities, noting that Chance has been operating his non-profit organization, Team Chance Basketball, for some time. “That he has blessed us to be able to be on this journey together. He has blessed me so that I can make sure that my husband can dream this way. He’s had a non-profit for a while now, and to be able to develop it the way he really wants to, and be able to put his all into it is such a dream for me.”

She continued, “To see him happy. To see him wake up and not have to be stressed to go to a job that is very dangerous, or not to have to be worried all the time. It gives a paranoia type of thing. To see that start to lift from him, gives me so much peace and joy. I’m just so excited about what he’s going to do. All the children, he’s already touched their lives, but all the children that will now be able to come because he’s available more.”

Not everyone was happy about the news, however.

Talk show host Wendy Williams called out the actress for retiring her husband last week, predicting that the Browns’ marriage “is going to be on real rocky ground in a moment” due to Tabitha’s financial support. The social media personality responded in what many are calling the classiest comeback of all time, telling Wendy, “I pray that someone will love you enough to see you.”

Tabitha Brown was also defended on social media by her millions of fans, who dropped avocado emojis in the comment section to show support.

The actress told theGrio that the love and embrace from her fans “makes me emotional.”

“It blows my mind. It really does. I never expect anything from anyone,” Tabitha explained, fighting back tears. “The way that people support me, it makes me emotional. Because all I do every day is try to show up as me 100% and spread love to people, and to receive it back the way that I do — it is really mind-blowing. It fills my heart with joy to know people love me genuinely because every day that is my intent, to lead with love.” 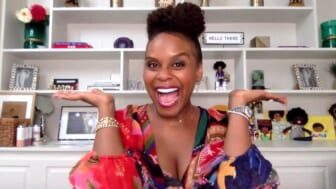 Also Read:
Tabitha Brown had tearful reaction to landing role on ‘The Chi’

Moving forward, Tabitha is focused on being the best version of herself that she can.

“After doing a lot of self-work for the last few years, I know I’m enough just as I am,” she shared. “I know I’m alright. When people have a problem with me, I know I’m not the source of the problem. That’s inner work that someone else has to do. I have peace within myself. God has given me peace. I know what my intentions are every day, to do good and be good, right?”

Fans can purchase McCormick Sunshine All Purpose Seasoning by Tabitha Brown on the McCormick website, pending restock, and watch theGrio‘s interview with Tabitha above.