The Hall of Fame songwriting/production duo spoke to theGrio about their new album, which includes guest appearances by a star-studded group of musicians

There are producers who are fortunate enough to be considered hitmakers. Some producers are considered institutions, while a small number of producers molded a region’s sound. However, very few can say all of the above apply to them, like Jimmy Jam and Terry Lewis. 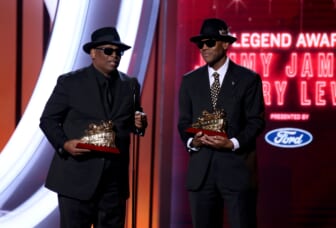 The two-person music factory has carved out their place in history by giving us classic after classic from the likes of Janet Jackson, New Edition, Usher, and Mary J. Blige. They, along with Prince, are the chief architects of the sound of Minneapolis.

And as they move into their fifth decade together, the fedora-wearing, five-time Grammy award winners have taken off their producer-for-hire hats and replaced them with new ones as artists.

Friday marks the release of the duo’s first album as artists, Jam and Lewis: Volume 1. The ten-song collection shows two men at the top of their game, crafting and molding songs that speak to current times without succumbing to current trends or sounding nostalgic.

It’s an uncanny record full of artists like Usher, Morris Day, Charlie Wilson and Sounds of Blackness that shows that Jam and Lewis are not only still great songwriters, but at ages 62 and 64, they’re still hungry.

From their first number one hit in 1983 for the S.O.S. Band, to their Grammy-winning 2008 album with Chaka Khan, Jimmy Jam, real name James Harris, and Terry Lewis have blessed artists with their unparalleled ability to fuse contemporary textures with ageless arrangements and universal lyrics.

That body of work has led them to 26 number one R&B singles and 16 number one Billboard 100 singles, according to ASCAP.

This time, it’s their turn to taste that success from a new angle. An album 35 years in the making, the idea to do a record was first born for a project they dubbed The Secret in 1985.

Harris said that “God’s timing” was responsible for their decision to finally do an album for themselves after decades of false starts and interruptions from producing and writing projects for other artists.

It was when they, along with fellow legend Kenny “Babyface” Edmonds, were inducted into the Songwriters Hall of Fame in 2017, that the light bulb flashed during a press interview.

“When the reporters asked us, what haven’t you done yet that you would like to do? Working with Babyface is one of them. Finishing our album was one of them and touring was one of them. Those are the three things we hadn’t done,” Harris said. “So we’ve been able to check off two of those boxes. And hopefully, when things get back to being a little safer, we can do the tour part also.”

Babyface sings, plays guitar, and co-wrote the album’s second single, “He Don’t Know Nothin’ ‘Bout It,” a ballad that harkens back to Babyface’s quintessential sound of love and longing that made him a household name in the 90s. However, he is only one of the myriad of star guests on Volume 1.

“What we did was we basically made a wish list,” Harris said. “We basically talked about everybody who we thought would be great to work with, and we made a long wish list.” 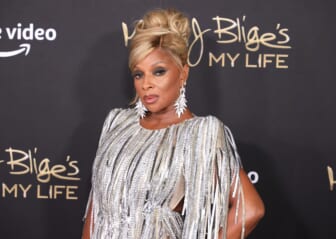 The duo says the intent was to craft songs that brought out the best of each guest artist and their established, world-renowned sounds. And although each artist collaborated in the creation of their song, Harris states that everyone had “their own little ways of coming together.”

For instance, one song, a lilting, emotional crescendo called “Happy Unhappy,” was their very first collaboration with Braxton (the only artist on the album they didn’t work with previously). When she was presented with the song title, Braxton was worried that a song with that title couldn’t work. But Harris knew that Terry, the chief lyricist of the duo, could make it work.

“And I remember when we got the song done, it was sort of a challenge because she said, ‘you’re not you’re not going to be able to write a song called ‘Happily Unhappy,’ because we had the title and she said she’s not going to be able to do that,” Harris said. “And of course, Terry was like, ‘OK, watch this,’ and did it. And then when she heard it, she was like, oh, my God, this is amazing. ‘OK, wait, let me write a bridge. Let me write a bridge.'”

For the album’s latest single, “Somewhat Loved (There You Go Breakin’ My Heart),” it was Carey who initiated the idea. “Mariah just sent us a song and she just said, I got this idea for a song. And it was just it was something that her and The-Dream had done together,” Harris shared. “And she said, ‘this is just an idea. See what you think.'”

Harris and Lewis loved it, saying it reminded them of Brenda Russell, the brilliant singer/songwriter behind tunes like Luther Vandross’ “If Only For One Night” and Lalah Hathaway’s Grammy-winning collaboration with Snarky Puppy, “Something.”

The sparse, slick lament brightened by soulful but driving keyboard chords, and finger snaps is a delightful canvas for Carey to showcase her peerless ad-libs and background vocals.

For the past few decades, Harris and Lewis have been used to making the music, recording with the artists, and going on their way as the hits pile up. But the experience of having to be the artist this time around is relatively new for them.

“So, normally we go through the process of talking to the artist, figuring out what the artist wants to do, writing, producing the song, completing the song, mixing wise. And then we turn it in and it comes out. And at that point we’re done with it,” Lewis said.

So, this time, he and Harris now had to be subjected to new questions about shooting music videos, and such. “It’s a whole different thing from the artist’s point of view, because, you know, that’s a whole other life that we haven’t had to do.”

With the album dropping on their relaunched label Perspective Records, they had to consider things for themselves they hadn’t in the past. However, Lewis explained that it’s been a “great journey” to have a team around them at Perspective to fill in the blanks and “see us the way that we can’t see ourselves.”

“You’re approaching it not only as a producer, songwriter, artist but as the label,” Lewis said. “So you’re making decisions about yourself for yourself. And that’s always extremely difficult. And, you know, one thing I always say is the barber can cut the back of his own head.” 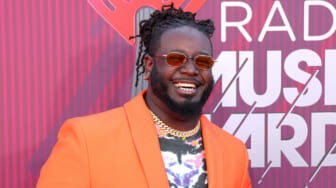 Also Read:
T-Pain reveals how he feels about those DMs, working with family on new album

Having their own label made things easier ultimately, as Harris says in normal circumstances “there’s a lot of cooks in the kitchen” from label execs to managers who muddy up the creative process of making records, finding guests and choosing singles. However, as their own bosses, those things never came to play.