Texas Republicans passed the bill, but if House Democrats don't return before the session's end, it can't become law.

Texas Democrats are not giving up on the voting rights of their constituents without a fight.

More than 50 members of the Texas state House left its capitol Monday to avoid voting on Republican-led voter suppression legislation.

Still, the Texas Senate passed the controversial bill the day after the Democrats’ departure. But, if they don’t return before the end of the special session, it can not pass in its House.

Nine Democratic senators left Austin to join their colleagues in protest. In a statement, they said, “Rather than continuing to fruitlessly debate Republicans who refuse to legislate in good faith, Texas Senate Democrats decided to take matters into their own hands to secure the voting rights of Texans — especially voters of colors, seniors and those with disabilities — and work with our partners at the federal level to pass voting rights legislation that would rein in discriminatory voter suppression laws and unfair redistricting practices.” 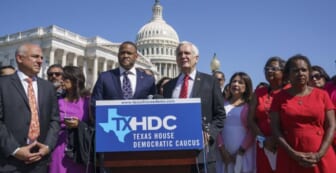 The Texas law, Senate Bill 1, would ban 24-hour and drive-through voting, add new voter identification requirements for voting by mail and increase the criminal penalties for election workers if they do not adhere to strict regulations. It will also greatly expand the authority and autonomy of partisan poll watchers.

Additionally, a bill to make it harder for people who are arrested to bail out of jail has also been included in the special session called by Texas Governor Greg Abbott. That bill will ban the release of those accused of violent crimes and restrict charitable groups from bailing people out.

Other Republican-led bills languishing in the state’s legislature while Texas Democrats are in exile include a critical race theory ban, as well as one restricting major tech companies from “censorship.”

The move by 51 Democratic House legislators to deny their Republican colleagues a quorum — the minimum number of lawmakers present to vote — is being celebrated as courageous.

On Twitter, longtime California Rep. Maxine Waters opined, “Democrats are fighting back! I am standing with the Texas Democrats who came to Washington, DC to stop Republicans from passing voter suppression laws! As democracy hangs in the balance, they are showing TRUE leadership. I am with them! We will fight back!”

After Republicans in the state vowed to bring the Democrats back under threat of arrest, Waters added, “The governor of Texas should think twice about wanting to arrest legally elected officials chosen by the people to represent them in the Texas legislature. This goes beyond undermining our democracy. This is tantamount to the destruction of our democratic processes!”

“Texas Democrats aren’t running away from anything. They’re fighting, with every tool they have, to save our democracy,” former Secretary of Labor Robert Reich also tweeted. “Senate Democrats should follow their lead, abolish the filibuster, and pass the For the People Act.”

As previously reported, the actions in Texas put pressure on the federal legislature to pass the John Lewis Voting Rights Act and the For the People Act by a carveout in the congressional filibuster rules.

In a speech in Philadelphia on Tuesday, President Joe Biden called America’s renewed fight for voting rights “the most significant test of our democracy since the Civil War.”