DaniLeigh announces her pregnancy: ‘As you grow so does my love’

Congratulations are in order for DaniLeigh. The singer has announced her pregnancy with a glamorous photoshoot on social media. 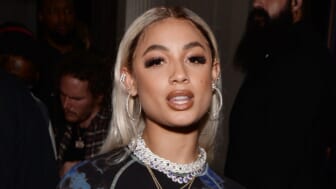 DaniLeigh surprised her Instagram followers on Friday. In a photoshoot in front of a luxurious waterfall in the Dominican Republic, the singer cradles a pregnant belly in her latest post. She writes: “As you grow so does my love, discipline, and focus 🤍.”

With over 500,000 likes, the mother-to-be is getting showered with love and her comments are flooded with congratulations and well-wishes from her followers.

Celebrity Fashion Stylist EJ King commented, “About time shit I’m so happy for u lil lady!!! May God keep blessing your union and ur family 🤍🤍🤍🤍.”

The singer has also shared behind-the-scenes content on her Instagram stories, with videos from the shoot posted to her story directly after her announcement. While she’s been previously linked to rapper DaBaby, DaniLeigh has not publicly shared the identity of the child’s father.

Fans speculated that the “Lil Bebe” singer was pregnant earlier this year, when she appeared fuller in the midsection at an event. She and DaBaby announced their breakup in February.

DaniLeigh, 26, born Danielle Leigh Curiel to Dominican parents in Miami, first came to prominence when the late music legend Prince asked her to provide a treatment for his 2013 video “Breakfast Can Wait.” She ultimately directed, choreographed, and starred in the video.

In 2020, DaniLeigh and DaBaby appeared together in her video for “Levi High.”

Many fans took issue with the singer for promoting colorism.

She defended her song, writing on social media at the time, “Why I can’t make a song for my light skin baddies?? Why y’all think I’m hating on other colors when there are millions of songs speaking on all types… Why y’all so sensitive & take it personal… Gahhhh damn.”

She eventually released an apology video, officially saying she was sorry to whoever she offended. She shared in an Instagram video, “I just wanted to address what’s going on with me right now. I think it’s super important because I definitely feel super misunderstood.”

She continued, “I think people twisted it into thinking, like, I’m trying to bash another woman, another skin tone; like, that was never my intention. I wasn’t brought up like that, I never looked at my skin as a privilege. I never looked at me as ‘I’m better than somebody because of my skin tone.'”