EXCLUSIVE: The model sat down with theGrio to talk about the differences between judging on 'Making the Cut' and being judged on 'America's Next Top Model'

Returning after a thrilling first season, Making the Cut is back on Amazon, this time with accomplished supermodel Winnie Harlow joining the judge’s panel. 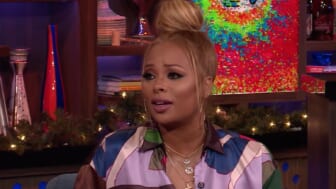 TheGrio caught up with Harlow before last Friday’s premiere, where she opened up about the series, what it means to her to be a part of the show, and the differences between competing in a reality competition, versus judging one.

Harlow is one of the biggest names in modeling, appearing on magazine covers like Vogue and Harper’s Bazaar, and in high-profile entertainment projects such as Beyoncé‘s Lemonade.

As fans may remember, Harlow’s career took off after appearing on the 14th cycle of America’s Next Top Model, hosted by Tyra Banks. With plenty of experience to offer to those entering the world of fashion, Harlow joins Amazon’s Making the Cut, hosted by Heidi Klum and Tim Gunn as they try to find, “the next great global fashion brand.”

“Jeremy Scott and Heidi Klum are so near and dear to me, they’re good friends,” Harlow told theGrio. “They are people that I look up to…I’ve walked many times for Moschino, and I’ve guest judged on Germany’s Next Top Model twice before that Heidi’s asked me to do. So it was something that was kind of natural.”

Still, she says, it has been such an honor joining the show, especially since last year Naomi Campbell was in her seat.

“Being able to work with them, as well as follow in the footsteps of legends was a no-brainer,” Harlow shared. She also shed light on what it’s like being in a televised competition yet again, but this time as a judge.

She explained, “I definitely got to see things on the other side. It was completely different…having to deliberate and choose who is winning, I feel like it’s close to — not as hard as — but close to as hard as being a part of the actual cast that is being judged.”

In this case, choosing a fashion brand to throw support behind proved to be a different kind of challenge.

“Sometimes they had some really amazing looks, and it was just so hard to choose but you do have to make that decision,” she continued. Summing up the season in three words for fans, Harlow said, “I would say passion…creativity, and I would say inclusivity.”

The first two episodes of Making The Cut season 2 are available to stream now on Amazon Prime Video. Watch the trailer below: