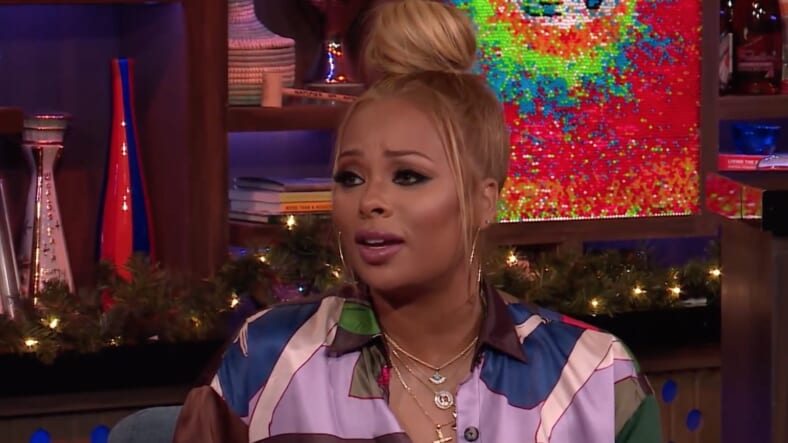 RHOA star, Eva Marcille, took time to throw some shade at Winnie Harlow over comments she made during an appearance on Watch What Happens Live in May.

Harlow told Andy Cohen that she credited photographer, Nick Knight, with jump-starting her career over Tyra Banks, who cast her on America’s Next Top Model.

“[My success] started after the show, ’cause that really didn’t do anything for my career. Which, it doesn’t do anything for any model’s career, realistically,” Harlow said on WWHL. “A photographer from London hit me up — major photographer Nick Knight — and he was like, ‘Hey, I’ve seen your photos online, and I want to do a shoot with you.’ It went viral, and I got campaigns from there, and it hasn’t stopped since.”

How model Winnie Harlow made history with three magazine covers

ANTM alum, Eva Marcille took issue with her comments and slammed the successful model when she appeared on WWHL on Sunday night.

“You know what, it amazes me that people get opportunities and they totally forget who gave them those opportunities. Winnie Harlow is a beautiful girl. Let’s be clear. We know her because of Top Model,” Marcille said. “The world knows her, Drake knows her, Wiz Khalifa knows her because of Top Model. To diss Tyra [Banks], who gave everyone this huge platform, I think it’s really whack.”

Harlow explains her stance in a lengthy social media post and insisted she has respect for Tyra Banks despite her comments.

“It has nothing to do with being ungrateful, and more over [sic] nothing to do with ‘shade’ to Tyra,” she wrote in an Instagram comment. “She was the first person of higher status to make me feel like I could be a model and not only am I grateful for that, it’s something I’ll never forget.”

“After being on the show no one would book me and no agency would sign me because of the Reality Tv stigma…Once I realized that, I stopped talking about it and grew my work base in Europe…That was when I realized you could be successful off the show in some ventures, but I had never really seen a Top Model in the fashion industry off the show…I understand people know me and have seen me on ANTM, but I never really talk about it because my goal is to always be honest but never to bash anyone’s empire…It’s just difficult to get around questions I usually would avoid, on a live show…My truth is, I stand by what I said and I say it because I don’t want girls thinking it’s a jump start to a modelling [sic] career because of me. I learned that the best thing to do to become a model and to be taken seriously is to take plain head shots and find a reputable modelling [sic] agency…I’m always grateful for every experience I have to learn and grow, but I also want to be real with young guys and girls whose dreams are to become models.”