Los Angeles County leaders are moving forward with a plan to return prime beachfront property to descendants of a Black couple who built a resort for African Americans but were stripped of the land by local city officials a century ago.

The Board of Supervisors voted unanimously Tuesday to pursue an action plan created by the county chief executive’s office on returning the land to the descendants of Willa and Charles Bruce once the state allows it.

The county would be a sponsor of state legislation that is needed to enable the transfer. 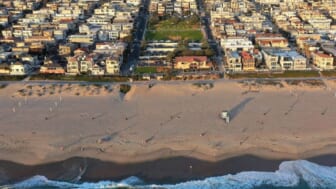 “We are on an important road to set a precedent that could be replicated across the country as we work to put actions behind our commitment to an anti-racist agenda and anti-racist county,” Supervisor Holly Mitchell said. “We cannot achieve racial equity until we confront our past and make it right.”

The plan discusses transferring the land, assessing the property’s worth, determining who the legal heirs are and limiting the property tax burden on the family, the Southern California News Group reported Wednesday. More details are expected later this year.

The property that became known as Bruce’s Beach is along the shoreline in Manhattan Beach, now an upscale city along the southern end of Santa Monica Bay.

The land was purchased in 1912 by Willa and Charles Bruce, who built the first West Coast resort for Black people at a time when many beaches were segregated. 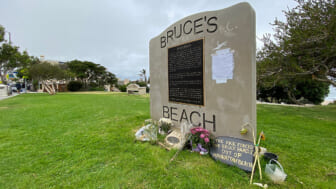 They suffered racist harassment from white neighbors and in the 1920s the Manhattan Beach City Council took the land away through eminent domain under the ruse of needing it for a park.

The city did nothing with the property, however, and it eventually was transferred to the state in 1948.

In 1995, the state transferred it to the county. That transfer came with restrictions on further transfers that can only be lifted through state legislation. A bill to do that was introduced in the state Senate earlier this year.