Two police officers have been arrested after one beat someone with his service-issued weapon, and the second is accused of failing to intervene.

The incident, captured on a body camera, happened Friday in Aurora, Colorado when Officer John Haubert pistol-whipped Kyle Vinson, a 29-year-old man he was trying to take into custody. Haubert also choked Vinson and threatened to kill him.

His partner, Officer Francine Martinez, was charged with failing to intervene and report the use of force by a peace officer.

“We’re disgusted. We’re angry. This is not police work,” Aurora Police Chief Vanessa Wilson said Tuesday at a news conference announcing the charges. “We don’t train this. It is not acceptable.”

Both officers posted bail and were released.

The bloody beating occurred when the officers were called on a trespassing report and, when they arrived, encountered three men sitting on a curb. Officer Martinez, 40, ascertained that each person had felony warrants; two of them ran away while the third, Vinson, was violently taken into custody.

At a press conference on Tuesday, Wilson said she did not believe Vinson knew he had an outstanding warrant for violating probation in a domestic violence case from 2018 when he was arrested. 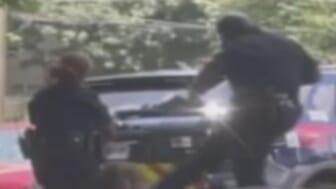 He was later taken to a hospital for welts and a cut on his head that required stitches, the New York Times reported.

In the body cam footage shown at the press conference, Haubert presses the muzzle of his gun into Vinson’s face, and Vinson can be heard saying, “You’re killing me, man.”

“If you move, I will shoot you,” Haubert replies in the video as he begins to squeeze his hands around Vinson’s throat, who appears to lose consciousness as another Aurora officer arrives and tases him.

An investigating officer wrote in an affidavit that “It does not appear … that Mr. Vinson had used any force against Officer Haubert or Officer Martinez,” adding that “Mr. Vinson complied with Officer Haubert’s orders.”

Aurora, which sits on the outskirts of Denver, is the same city where 23-year-old Elijah McClain died at a hospital in 2019 after a police interaction in which he was placed in a chokehold while walking home from work. Paramedics who were called to the scene injected McClain with a large dose of ketamine, and he died days later.

Images of the special-needs man crying and begging for his life as officers detained him drew public outrage, and his name joined the long roster of Black people killed by police for minor infractions at the root of the Black Lives Matter movement. 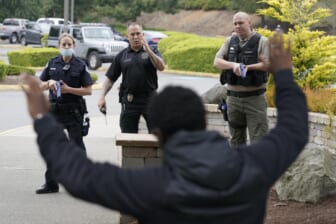 Last year, a group of Black women and girls were detained by Aurora officers, who pointed guns at them and forced them to lay face down on the sidewalk after they were stopped because their license plate matched that of a stolen motorcycle.

The women were eventually unhandcuffed, and officers attempted to apologize, but the video of the detained damsels sobbing went viral.

The two incidents prompted Colorado legislators to pass a police reform bill that will require body cameras across the state by 2023, bans chokeholds and limits potentially lethal use of force. Additionally, the state removed qualified immunity from police officers, which could mean that the officers Haubert and Martinez could be held personally financially accountable for their actions in Vinson’s case.