Lil Nas X stunned the world with his epic performance of “Montero (Call Me By Your Name)” at the 2021 BET Awards.

In the latest cover story for Out Magazine, the openly gay entertainer opens up about that performance, calling it “terrifying” and like “jumping in lake of sharks.”

Written by Tre’Vell Anderson, the wide-ranging interview with the rapper was held five days after the headline-grabbing BET performance. Nas X graces the cover shirtless with a white feather jacket draped over him in the issue published this week.

Speaking to his mindset going into the performance, he shared, “Going to this place with all these overly masculine rappers and you’re finna be in there throwing a little ass every now and then, touching on dudes and hugging them and kissing them…at some points I was like, ‘Should I even do this? I don’t feel like they’re going to love me like that.'” 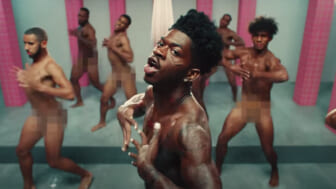 Nas X also opened up about his upbringing, growing up in Atlanta, and how that has shaped his adult life.

“Growing up in the Atlanta area, I [saw] a lot of microaggressions towards homosexuality,” he explained. “Little things like going into an IHOP and hearing one of your family members say, ‘Look at those f—-ts’ to two people eating or even just a small [statement like] ‘Boys don’t cry.’ Little sh*t like living in the hood, not being super into sports, and then having to go outside and pretend that I was.”

This is exactly why the BET performance meant so much to him, and thus means so much to so many young people in the LGBTQ+ community. He had to get it just right, he explained.

“Mentally, it’s really draining and straining sometime. The pressure of living your entire life knowing the identity of what a rapper is supposed to be, what rappers [are supposed to] do, and going out there in front of all these people, it’s terrifying. [The BET performance] was like jumping in a lake full of sharks and piranhas — and I’ve had to do that so many times within these last three years. Even coming out, that was terrifying.”

Check out the full cover story over at Out Magazine.