Rev. Al Sharpton and Martin Luther King III hosted a call on Aug. 5 to honor the 56th anniversary of the Voting Rights Act of 1965. The call was held amid news of a new federal voting rights bill potentially being proposed next week. 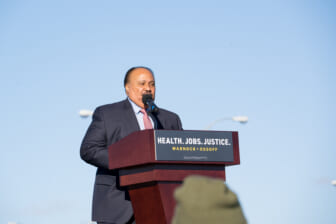 King and Sharpton were joined by Arndrea Waters King, Alejandro Chavez, Andi Pringle, and Stasha Rhodes — the organizers hosting the national March On For Voting Rights on Aug. 28, per a press release.

The leaders answered questions about necessary congressional action on voting rights, their recent Hill meetings with Texas state Democrats, and the need for federal legislation to restore the Voting Rights Act after key provisions were stripped away in the 2013 Shelby County vs. Holder decision.

In 2021 alone, over 400 racially targeted voter suppression laws have been proposed in states around the country. Voting rights activists are calling on Congress to pass the For the People Act, the John Lewis Voting Rights Act, and the Washington, D.C. Admission Act.

“Achieving change, especially legislative change, is not based on the urgency of the lawmakers — it is based on the urgency of those of us that are going to force the lawmakers. Nobody got up one morning and said ‘it’s time to give people a right to vote.’ It was the women’s movement and it was the civil rights movement that made that urgency happen,” said Sharpton, founder and president of National Action Network, on the call.

“[In 1963] the votes didn’t look like they were there. That’s why activists have to get acting — if it was already there, we would have never had a movement. [President] Lyndon Johnson didn’t lead the Voting Rights Movement, he signed the bill. [President] Joe Biden will sign this bill, and we’re going to be the ones that make sure that there’s something for him to sign.”

“There is something happening in the fabric [of America]. Last year after the death of George Floyd we saw more civil rights demonstrations by Americans than we’ve seen in a long time… That same energy is being galvanized around expanding the right to vote,” said King, chairman of the Drum Major Institute.

“My father used to say that a voteless people is a powerless people, and the most powerful step that we can take is that short step to the ballot box,” King continued. He added, “We must demand that America become who it ought to be, and one of the ways it does that is through its most fundamental right: the right to vote. So we will come together on Aug. 28 and […] fight on this issue.”

The Voting Rights Act of 1965 explicitly prohibited racial discrimination in voting, provided for direct federal intervention to ensure that Black Americans could register and vote, and banned tactics like poll taxes commonly used to prevent voters from participating in democracy.

But in 2013, the Supreme Court in Shelby County v. Holder held that the preclearance provision of the Voting Rights Act was unconstitutional. The court’s decision opened the door for states to enact sweeping and racially discriminatory voter suppression laws, making it harder for people to vote.

Seventeen states have passed laws that restrict access to voting in the wake of “the big lie” about widespread fraud in the 2020 presidential election, and that number is expected to grow as state Republican legislators continue to push restrictive bills through, theGRIO reported.

Earlier this year, Michelle Obama and several others joined forces to release an open letter urging all Americans to support the For the People Act, introduced as bill H.R. 1, in the U.S. Congress to expand voting rights.

“The #ForThePeopleAct is a chance to reaffirm that in America, the power rests with the people. It’s our best chance in a generation to protect and strengthen our democracy,” the former first lady wrote on Twitter.

“This is the moment that either we do what is right and honest, and rescue democracy, or we take a huge step towards autocracy. That’s what the March On for Voting Rights is all about,” said Pringle, political and strategic campaigns director for March On, on the call with King and Sharpton this week.

“Today, 18 states have signed more than 30 [voter suppression] bills into law. They undo so much of the progress that was made in voting access, not just in the 2020 election, but since the 1965 Voting Rights Act was passed. We’re standing in the middle of what you might call a perfect storm, but it’s really an existential crisis for democracy in America.” 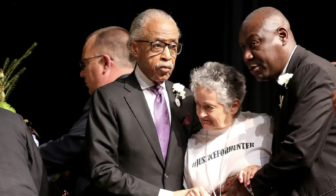