Maher prompted the clash during an interview when he shifted the discussion topic to “muzzle laws,” referring to the legislation Republican lawmakers are introducing in order to limit classroom discussions about race.

“Critical Race Theory, essentially, argues that racism is baked into all the systems of American society and that any sort of neutral system is in fact a guise for racial power,” Shapiro said “Even things that are purportedly good, in terms of race, so long as they uphold these broader systems, things like capitalism, things like the meritocracy, these things are just guises for power.”

“What that boils down to in sort of practical terms is, all disparity equals discrimination,” he added. “If you can see any stat where Black people are underperforming white people, this means the system was set up for the benefit of white people and that white people have a duty to tear down these systems in order to alleviate the racism that’s implicit in those systems.”

“When it comes to schools what this tends to boil down to is kids who are white have experienced privilege because the system was built for white people and we have to change the standards,” he continued.

Nance, when asked for his definition of the term, said he agreed with Shapiro’s definition because it was “grounded in truth,” and with a laugh, thanked him for “being honest in defining what it’s like to be Black American.”

He continued to explain that the American education system doesn’t just avoid classroom discussion about bigotry against Black Americans, but dismisses the topic as a whole.

Nance referenced examples of bigotry against other racial and ethnic groups including the Scalp Act of 1756 where, as he defined, “for 300 modern dollars you had to cut off the head or the hair of an Indian to prove that you’ve got them out of the way so they could settle.”

“That’s a little bit of American history that people should know about,” Nance said, also referencing the Chinese Exclusion Acts of the 1850s through the 1870s. “These are things we don’t talk about.”

Shapiro disputed Nance’s claim that these topics are not talked about in schools and suggested that Nance “succeeded” within the very same meritocracy he was criticizing.

“Malcolm I’m sorry you’re lying,” Shapiro said. “Not only have I personally talked about many of the things that you just mentioned…you seem to be a pretty good beneficiary of the meritocracy because you have merit, Malcolm. So if you’re going to criticize the meritocracy as an outgrowth of white supremacy then you’re going to have to tear down the system that you’ve succeeded in because you have merit. Or do you not have merit?” 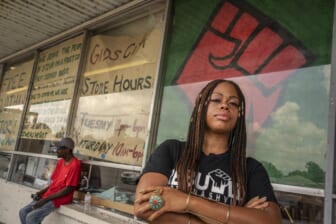 “You know, when my great-great-grandfather ran away from slavery to join the 111th U.S Colored Troops and fight against the South keeping human beings as slaves, he didn’t think: ‘You know what, in 150 years, my great-great-grandson’s going to have to sit on stage and argue with a guy who thinks all that’s bulls**t,” Nance fired back.

He later said that scholars of critical race theory are not saying “we want to go back and erase everything,” rather the point is to talk about ‘historical figures who did bad things.”

“What’s happened here is this terminology, sort of like ‘defund the police,’ has been hijacked and been framed around the left as that…they want to rip down the entire social fabric of America and they want us to be guilty about everything. I want you to teach history,” he continued.

“Is this what you do on your show?” ‘Cause it sucks,” Nance said, after which Maher ended the discussion.