Death toll from Haiti earthquake rises to more than 700

The death toll from a powerful magnitude 7.2 earthquake in Haiti climbed sharply on Sunday, with at least 724 dead and a minimum of 2,800 injured.

The updated figures from Haiti’s Office of Civil Protection follow a previous count of 304 dead. The office’s director, Jerry Chandler, said rescuers are continuing to search for possible survivors under the rubble.

People in the Caribbean island nation rushed into the streets to seek safety and to help rescue those trapped in the rubble of collapsed homes, hotels and other structures. 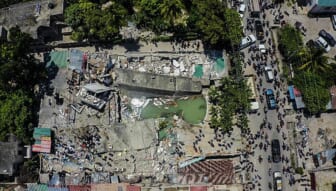 Saturday’s earthquake struck the southwestern part of the hemisphere’s poorest nation, almost razing some towns and triggering landslides that hampered rescue efforts in two of the hardest-hit communities. The disaster added to the plight of Haitians who were already grappling with the coronavirus pandemic, a presidential assassination and a wave of gang violence.

The epicenter of the quake was about 78 miles west of the capital of Port-au-Prince, the U.S. Geological Survey said. The widespread damage could worsen by early next week, with Tropical Storm Grace predicted to reach Haiti late Monday or early Tuesday, bringing torrential rains.

Aftershocks were felt throughout the day and through the night, when many people now homeless or frightened by the possibility of their fractured homes collapsing on them stayed in the streets to sleep — if their nerves allowed.

In the badly damaged coastal town of Les Cayes, some families salvaged their few belongings and spent the night at an open-air football pitch. On Sunday morning, people lined up to buy what little was available: bananas, avocados and water at a local street market. 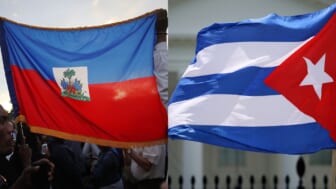 Some in the town praised God for surviving the earthquake, and many went to the city’s cathedral, which appeared outwardly undamaged even if the priests’ residence was destroyed.

“We only have Jesus now,” said Johanne Dorcely, 58, whose house was destroyed. “If it wasn’t for Jesus, I wouldn’t be able to be here today.”