Meghan Markle, Prince Harry on Afghanistan: ‘We are left heartbroken’

Meghan Markle and Prince Harry are speaking out about the Taliban once again taking control in Afghanistan after President Joe Biden pulled U.S. troops out of America’s longest-running war.

After the terrorist group rolled through the capital city of Kabul on Sunday, President Ashraf Ghani fled the country, the government collapsed and thousands of people have abandoned their homes.

In a statement shared on their Archewell Foundation website on Tuesday, the royal couple addressed the situation, as well as earthquake-stricken Haiti and the COVID-19 pandemic. 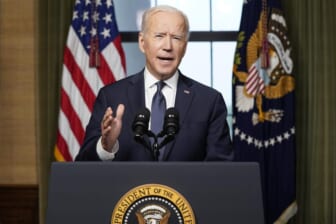 “The world is exceptionally fragile right now,” began Meghan and Prince Harry. “As we all feel the many layers of pain due to the situation in Afghanistan, we are left speechless. As we all watch the growing humanitarian disaster in Haiti, and the threat of it worsening after last weekend’s earthquake, we are left heartbroken. And as we all witness the continuing global health crisis, exacerbated by new variants and constant misinformation, we are left scared.”

“When any person or community suffers, a piece of each of us does so with them, whether we realize it or not,” they continued. “And though we are not meant to live in a state of suffering, we, as a people, are being conditioned to accept it. It’s easy to find ourselves feeling powerless, but we can put our values into action — together.”

Meghan and Harry went on to urge political leaders “to rapidly advance the humanitarian dialogues.”

“As an international community, it is the decisions we make now — to alleviate suffering among those we know and those we may never meet — that will prove our humanity,” they concluded.

Prince Harry also addressed the Taliban situation via a joint statement with Dominic Reid, the CEO of Harry’s Invictus Games.

“We encourage everybody across the Invictus network — and the wider military community — to reach out to each other and offer support for one another,” the statement concluded.

President Joe Biden and other top U.S. officials have been stunned by the pace of the Taliban’s nearly complete takeover of Afghanistan. The planned withdrawal of American forces urgently became a mission to ensure a safe evacuation, theGrio previously reported.

The speed of the Afghan government’s collapse and the ensuing chaos became the most serious test of Biden as commander in chief, and he was the subject of withering criticism from Republicans who said that he had failed.

Biden campaigned as a seasoned expert in international relations and has spent months downplaying the prospect of an ascendant Taliban while arguing that Americans of all political persuasions have tired of a 20-year war.

By Sunday, though, leading figures in the administration acknowledged they were caught off guard with the utter speed of the collapse of Afghan security forces. The challenge of that effort became clear after reports of sporadic gunfire at the Kabul airport prompted Americans to shelter as they awaited flights to safety after the U.S. Embassy was completely evacuated.

National security adviser Jake Sullivan said Monday that Afghanistan fell faster than the administration expected, and blamed the government’s fall on the Afghans themselves.

“It is certainly the case that the speed with which cities fell was much greater than anyone anticipated,” Sullivan said Monday on NBC’s Today.

President Biden defended his decision to withdraw the troops from the country, despite the consequences.

“The question is, how much of a threat to the United States of America, and to our allies, is whatever results?” Biden asked. “Let me ask those who want us to stay: How many more, how many thousands more American daughters and sons are you willing to risk? How long would you have them stay?”

The president was resolute that he had made the right decision in his address to the nation on Monday.

“American troops cannot and should not be fighting in a war and dying in a war that Afghan forces are not willing to fight for themselves,” Biden said.