His online menacing also included posts about wanting to slice “a throat” at the U.S. Capitol.

A Proud Boys supporter is facing up to 15 years in prison for making threats to Rev. Raphael G. Warnock hours after the Democrat won the special Senate runoff in Georgia on Jan. 6.

Eduard Florea, 41, of Middle Village, Queens, reportedly hit up the conservative social media platform Parler and wrote: “Warnock is going to have a hard time casting votes for communist policies when he’s swinging with the … fish.” 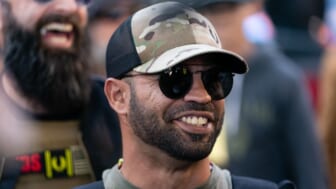 Florea pleaded guilty to threatening to kill Sen. Warnock on Monday in federal court in Brooklyn. He faces up to 15 years in prison, but federal sentencing guidelines will likely see him spend about 15 to 21 months behind bars. He is scheduled to be sentenced on Nov. 29, The Washington Post reports.

His online menacing also included posts about sending “three cars full of armed patriots” to Washington and wanting to slice “a throat” at the U.S. Capitol.

“With today’s guilty plea, Florea admits to threatening the life of a successful candidate for the U.S. Senate and to urging others to take up arms to unleash violence at the Capitol on January 6, 2021 to thwart the results of the Presidential election,” Acting U.S. Attorney Jacquelyn Kasulis said in a statement.

Federal agents conducted a search of Florea’s home days after supporters of former President Donald Trump stormed the U.S. Capitol. As reported by The Associated Press, he pleaded guilty to a weapons charge after investigators searching Florea’s residence on Jan. 12 found more than 1,000 rounds of rifle ammunition along with military-style combat knives. Because of a prior felony gun conviction related to a 2014 case, Florea was prohibited from owning ammunition.

Florea’s wife, Joni, previously told WPIX-TV that he “was convinced he was going to have to go out and fight a civil war.”

She said her husband was abusive and described him as a “horrible monster” who kept a box of Nazi memorabilia.

Florea allegedly applied to join the Proud Boys group and was with several members when they vandalized a historically Black church in Washington in December.

“He came back in a van full of people,” Florea’s wife told WPIX-TV. “He told me two of them were Proud Boys. He sold them to me as these patriotic people who loved their country.”

The church vandalism occurred on Dec. 12 when Henry “Enrique” Tarrio and a group of his affiliates removed a Black Lives Matter banner from Asbury United Methodist Church in Washington, D.C., and set it aflame, theGrio previously reported. The Miami, Florida man later posted about burning the banner on social media.

Tarrio, 37, was arrested for the destruction of property on Jan. 4 as he arrived in D.C. for the “Stop the Steal” rally that would days later lead to the Capitol insurrection on Jan. 6. When apprehended, he was found to be in possession of two high-capacity firearm magazines that bore the insignia of his organization. He was then also charged with attempted possession of a large-capacity ammunition feeding device. 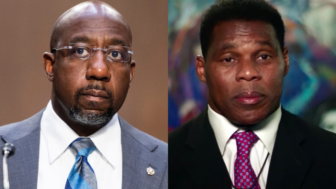 Also Read:
Warnock vs. Walker? Someone tell Republicans replacing one Black man for another doesn’t work

Tarrio was not present during the Capitol insurrection because he was in jail, theGrio previously reported. However, he later acknowledged that his group participated, and he expressed no remorse for what happened that day.

“I’m not going to worry about people that their only worry is to be reelected,” he said back in February of lawmakers who feared for their lives that day.

“I’m not gonna cry about people who don’t give a crap about their constituents. I’m not going to sympathize with them,” he told CNN. “When they support drone-bombing children in the Middle East … [and] those people are dead and they’re just cowering because a group of misfits came into the Capitol, I’m not going to be sympathetic.”

Tarrio, who identifies as Afro-Cuban, said members of the Proud Boys should not have smashed in buildings of the historic building, but blamed the Capitol Police for “their inability to respond” to the attack.