California Attorney General Rob Bonta announced on Tuesday that the California Department of Justice will conduct a review on BART police officer Anthony Pirone’s involvement in the death of Oscar Grant. 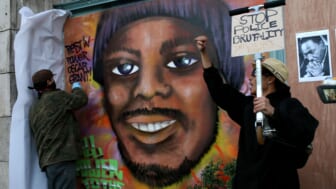 Grant, 22, an unarmed Black man, was shot and killed on New Year’s Day in 2009 by police officer Johannes Mehserle on the Fruitvale BART subway station platform in Oakland. Mehserle claims to have mistaken his gun for a Taser when he shot Grant in his back while he was already on the ground.

A still picture taken from the video shows a second officer, Pirone, with his knee pinned on Grant’s neck. Mehserle denied purposely killing Grant but was convicted of involuntary manslaughter. He was sentenced to just two years in prison but served only 11 months.

Grant’s mother Wanda Johnson, along with the rest of his family, have been requesting an independent review of Pirone’s actions for years.

“Transparency is critical to building and maintaining trust between law enforcement and the communities we serve,” said Bonta. “The California Department of Justice is committed to conducting a thorough, fair, and independent review and will go where the facts lead,” the attorney general’s office said, according to Fox KTVU.

In January, Alameda County District Attorney Nancy O’Malley released a YouTube video along with a 16-page District’s Attorney report announcing she would not be moving forward with charging Pirone with any criminal offense, citing that there is no evidence that Pirone expressed and implied malice before the shooting and that he was not the one who pulled the trigger.

“There is no evidence that Pirone personally caused Mr. Grant’s death,” O’Malley said. “The autopsy report states that the gunshot wound was the cause of death. The autopsy report shows no injury to the neck or head or any other part of Mr. Grant’s body that could have caused or contributed to his death. There was no internal injury other than those caused by the gunshot wound. There is no evidence of brain damage or asphyxiation.”

After that finding, Grant’s family said they would work to force O’Malley’s recall. According to MSN, the prosecutor announced she will not seek reelection after her term ends in 2022.

On Tuesday, after the announcement that there will be a review on Pirone, a new statement from O’Malley was added to the Alameda County District’s Attorney’s website.

“We join the Attorney General in our commitment to open, honest and legally supported decision making in reviewing cases presented. We stand strong in our commitment to the fair, equitable and ethical administration of justice, including in-case review and/or prosecution,” O’Malley said. 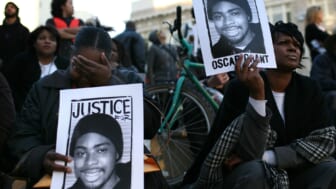 Johnson said this review of her son’s death was long overdue, MSN reported.

“We’ve been asking that he be charged from the very beginning,” she said of Pirone. “We are grateful. We just want justice to be fair all around.”