Both accuse the other of cheating in newly released documents; Sonya admits she's in a new relationship

If you thought that Sonya Curry and Dell Curry would have a harmonious divorce after they announced this week that they were splitting up after 33 years, you’d be wrong.

The day after it was reported that Sonya filed for divorce in June and the pair released a statement that they were going to continue to co-parent and co-grandparent, things took a turn.

TMZ reports that divorce docs paint a different picture with the estranged couple accusing each other of cheating. The parents of NBA players Seth Curry and Steph Curry, who play for the Philadelphia 76’ers and Golden State Warriors respectively, have been in a trial separation for the better part of a year, according to their joint statement.

It appears that when Sonya filed for divorce in North Carolina, she cited “marital misconduct” as the reason. Dell fired back, also accusing Sonya of “Illicit sexual misconduct” and then saying his soon-to-be ex-wife lied about it. 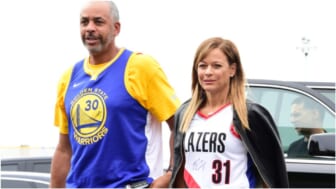 Sadly for Sonya’s many aspiring suitors, who made her a trending topic on Instagram on Monday, Dell alleges that Sonya is already living with another man, former NFL player Steven Johnson. The ex-athlete attended the estranged couple’s alma mater, Virginia Tech, from 1984 to 1987.

According to the documents, Dell claims that Sonya “began her extramarital affair with Mr. Johnson during the marriage and prior to the date of separation, and she lied to [Dell] each time she cheated on him.”

While she admits to a new relationship that began after they legally separated in March of 2020, she’s says that she’s not living with anyone but has been forced from her former marital home by Dell, per TMZ.

Sonya also alleges that Dell cheated on her repeatedly during their 33-year marriage while he played in Charlotte, Toronto, Milwaukee, Cleveland and Utah during his 16-year NBA career. Sonya alleges that Dell’s cheating was an open secret among their family and close friends.

The couple met at Virginia Tech while attending school in the ’80s and had Steph in 1988.

According to the report, Sonya held back the details to protect her husband and family from “possible public exposure and scrutiny.” Both of her sons are NBA players, her son-in-law, Damion Lee, who is married to her daughter Sydel, also plays in the NBA and is on the Warriors with Steph.

Lee and Sydel recently announced they were expecting their first child.

Seth is married to Callie Rivers, who is the daughter of the Sixers coach, Doc Rivers.

Dell, 58 and Sonya, 55, have been one of the NBA’s most prominent couples, both during their tenure in the NBA and as the parents of second-generation NBA players. Steph, 33, has been one of the new faces of the NBA with major endorsements, and a high public profile with his wife, Ayesha, 32, who is an influencer and entrepreneur.

The family has maintained an unimpeachable public image thus far, through their various endeavors and social media platforms. Aside from their public statement, no one from the Curry family has publicly spoken about the divorce.

In their joint public statement as reported by theGrio, Dell and Sonya said:

“After exploring a trial separation over the past year and much thoughtful consideration, we have decided to end our marriage. As this comes with a great deal of sadness, our focus and desire is for our family’s continued happiness. We are so thankful for all the many blessings and successes! We stay committed to and supportive of our children and grandchildren and will remain on connected paths. We ask that our privacy be respected and prayer for our family as we move forward.”