Game of Thrones fans may have a new fantasy series to look forward to. Jacob Anderson has been announced as the lead in AMC’s new adaptation of Interview with the Vampire.

The popular 1976 novel, Interview with the Vampire by Anne Rice, was brought to the screen originally in 1994, in a film starring Brad Pitt as Louis and Tom Cruise as Lestat, and also featured performances from new actresses Thandie Newton and Kirsten Dunst.

The film was considered a success, earning more than $223 million worldwide against a $60 million budget at the time. 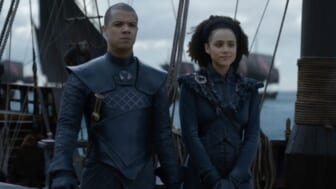 Also Read:
The latest death on ‘Game of Thrones’ has Black fans pouring out a little liquor

Anderson gained popularity after playing Grey Worm in the hit HBO series, Game of Thrones. He will play Louis in AMC’s adaptation, opposite Sam Reid. Per the Deadline report, the series is, “slated to begin production on its eight-episode first season later this year for premiere on AMC and its sister streamer AMC+ in 2022.”

AMC acquired the rights to Rice’s entire best-selling book series The Vampire Chronicles, as well as The Lives of the Mayfair Witches in 2020, per Variety. Rice and her son Christopher Rice will serve as executive producers on the series and films produced under this deal.

“It’s always been my dream to see the worlds of my two biggest series united under a single roof so that filmmakers could explore the expansive and interconnected universe of my vampires and witches,” Anne Rice shared in a statement at the time. “That dream is now a reality, and the result is one of the most significant and thrilling deals of my long career.”

Sarah Barnett, president of AMC Networks Entertainment Group and AMC Studios, also shared in a statement at the time, “There is no shortage of content in today’s competitive environment, but proven IP that has captivated millions of fans around the world is something very special and rare, and that is what Anne Rice has created.”

Rolin Jones, is described as “directly involved in developing projects based on the Rice catalog for television.”

Speaking of Jones, Barnett said, “These remarkable stories and characters are massive in their appeal and we are privileged to take over stewardship of these legendary works and collaborate with a talent like Rolin Jones to find ways for new generations of fans to experience these worlds.”